This month’s featured pose is Bhujamadya Sirsasana or Elbow-supported Headstand. The name of the pose is derived from the terms “Bhujamadya” which loosely translates to breast or chest, “sirsa” or head and “asana” or pose. Because of the deep arch in the back, the attention is led to the chest of the practitioner.

Degree of Difficulty
(100 being most difficult)
85

Backward Bending
A spinal movement done with the extension of the spine, supported by different back muscles.

Shoulder Girdle Elevation / Upward Rotation
A lateral/outward and upward movement of the scapula or shoulder blades.

Hip Flexion
A movement of bringing the thigh or top of the pelvis forward, decreasing the angle in between (as in forward bending).

Minor Movements
Scapular Retraction
Moving the scapula away from the midline of the body, having the sensation that the upper-back muscles are squeezed together.

Low or High blood pressure
Due to the irregularity of the blood pressure, coming into an inversion may lead to increased oxygen in the brain; in most cases, the body can regulate the pressure but for some, this may result in nausea or dizziness.

Hyperkyphosis
Refers to an excessive curvature of the thoracic spine, commonly referred to as hunchback. As this is a backward bending pose, having a hunched back poses a difficulty in achieving the pose.

Deltoid
The muscle forming the rounded shape in the shoulders, the deltoid muscles assist and support in the abduction of the shoulder.

Trapezius
One of the major muscles of the back, the trapezius is responsible for moving, rotating, and stabilizing the shoulder blades and extending the head at the neck.

Rhomboids
A rhombus-shaped muscle located at the back with the function of assisting in squeezing the shoulder blades.

Rectus Abdominis
It is responsible for the flexing of the lumbar spine and keeping the internal organs intact, therefore working with the Erector Spinae especially in backward bending movements.

Biceps
A two-headed muscle that lies on the upper arm between the shoulder and the elbow. The major function of the bicep is to allow the twisting of the forearm and to flex the elbow.

Best Time to Practice
Afternoon or evening, when the body’s natural flexibility is present

Benefit: Opens the chest, promotes external shoulder rotation and prepares the upper and middle back for deep backward bending. 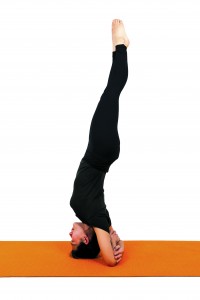