By Louise Vas, with the guidance of Yogananth Andiappan
Poses demonstrated by Olivia Torres Pesce

Considered the Queen of asanas, Sarvagasana or Shoulderstand is an accessible pose to almost all practitioners. It is taught in most yoga asana classes for improved blood circulation and for its calming & soothing benefits.In this month’s featured pose, we aim to bring a new level of practice with an enjoyable variation to shoulderstand. 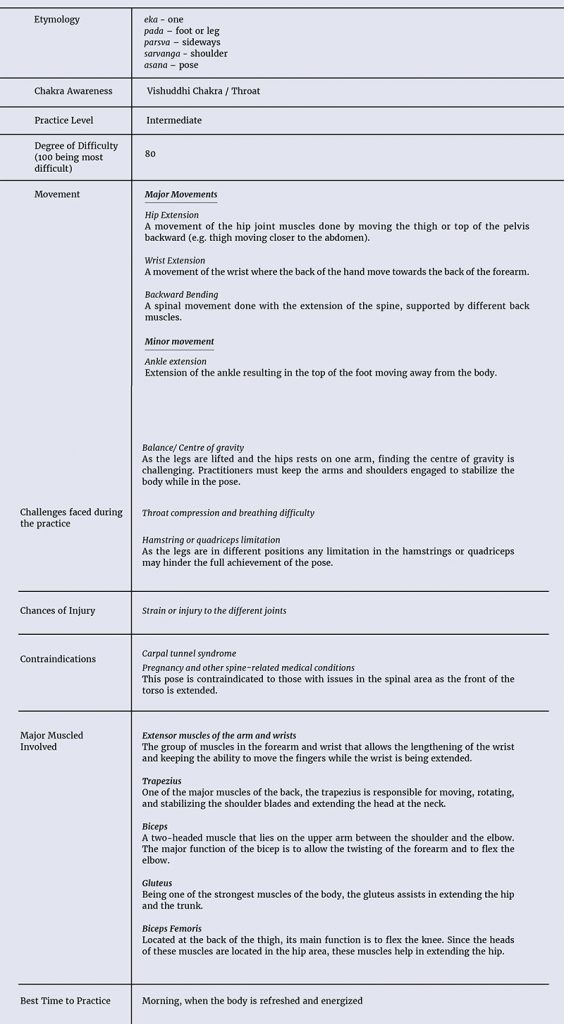 1. Sit with the knees bent and place the hands behind, about a foot away from the hips. The fingers are pointing forward.
2. Inhale and on exhale, pull the chest in and bend the elbows to round the back, aiming to bring the lower back to the floor.
3. Hold the stretch for a few breaths then come up slowly. Come in and out of the pose a few times, trying to lower the back even more after each time.
Benefit: Improves shoulder rotation and stretches the muscles of the upper back.

1. Sit on the floor in Dandasana/Staff pose with the legs straight and back upright.
2. Place the hands on the shoulders and squeeze the elbows in.
3. Inhale and on exhale, lean back until the torso is diagonal to the floor. Extend the ankle and point the toes.
4. Engage the lower abdomen and hold the pose with a few light breaths.
5. Slowly sit upright and bend the knees to relax the legs.
Benefit: Strengthens the muscles in the abdomen and back.

Setu Bandhasana / Bridge Pose
1. Lie down on the floor, bend the knees and keep the feet slightly wider than hip-width. Arms are beside the body.
2. Inhale and on exhale, press the arms on the floor and lift the hips.
3. Bring the hands under the hips and keep the elbows on the floor. Slightly move from left to right to slide the elbows in, allowing the chest to widen and the back to
arch.
4. Keep the head in the centre. Hold for a few breaths then release by sliding the arms out and bringing the hips back to the floor.

Straight Legs variation
1. From bridge pose, slowly extend the legs one at a time, hip-width.
2. Engage the thighs and keep the legs straight, while rolling the legs inwards.
3. Extend the ankles by pointing the toes forward, toes touching the floor if possible.
The above practice of Setu Bandhasana can also be practiced using blocks. To come into the pose, prepare two blocks on the side of the body. Upon lifting the hips, slide the blocks under and rest the sacrum on the block.

Butterfly pose variation – block support
1. Once in Setu Bandhasana, bend the knees sideways and bring the soles of the feet touching.
2. When stable, hold the opposite elbow and raise the arms above the head. Rest the arms on the floor.

Straight legs variation – block support
1. From the butterfly pose variation above, extend the legs and keep the legs hip-width or slightly wider.
2. Engage the legs and keep the knees straight. Roll the legs inwards and point the toes upwards.
3. Stay in the pose for a few breaths, allowing the chest to expand while in this pose.
Benefit: Prepares the lumbar and hip areas for backward bending and hip extension. 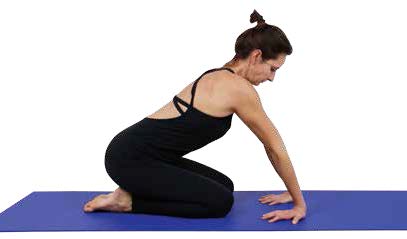 Wrist Stretch
1. Come down to the floor on the hand and knees, similar to tabletop pose.
2. Rotate the wrists outwards so that the fingers are pointing towards the knees. Maintain both arms straight.
3. Inhale and on exhale, bring the hips back and feel the stretch on the wrists. Hold for a few breaths.
4. Repeat several times by moving in and out of the pose together with the breath.
Benefit: Extends the muscles of the wrist to take pressure from the arm balance.

1. Start by lying down on the floor with the arms by the side of the body.

2. Bend the knees and lift the hips. 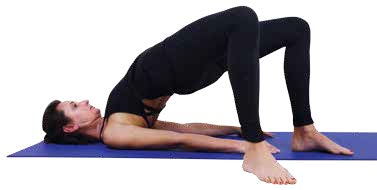 3. Keeping the hips lifted, bring the legs to the right side, the left heel in line with the right hand. 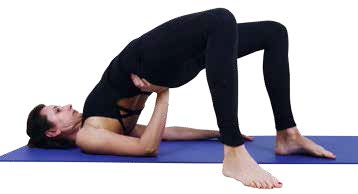 4. Bring the right hand under the sacrum/middle of the pelvis to support the body, while keeping the left hand on the floor. 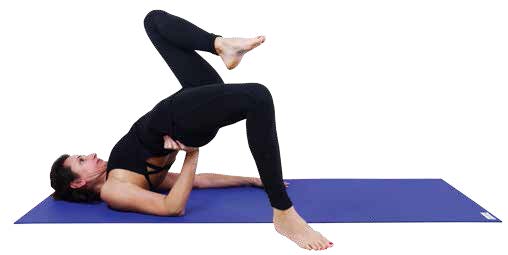 5. Bend the left knee and raise the leg closer to the body. 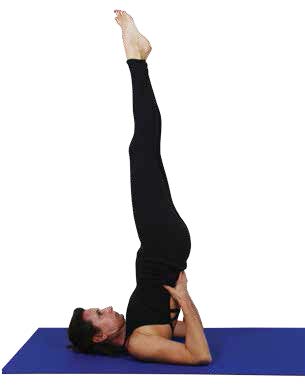 1. Come into Salamba Sarvangasana, the hands supporting the back. 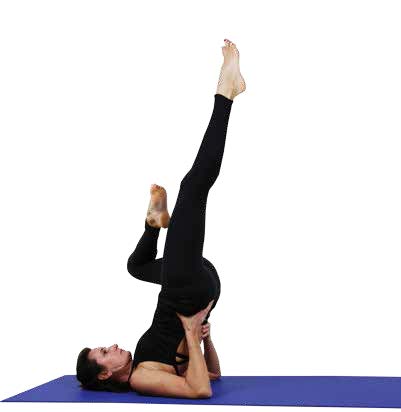 2. Bend the left knee and bring it closer to the body, while keeping the right leg straight, in line with the torso. Allow the pelvis to tilt forwards. Slowly support the left side of the body with the left hand, holding the waist. 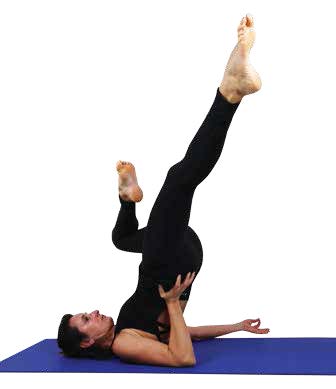 3. Release the support from the left hand and rest the arm on the floor. 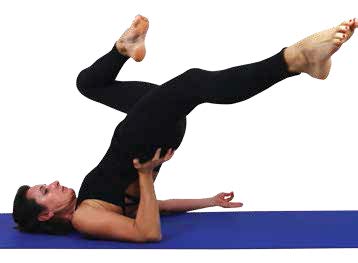 4. Slowly lower the right leg, keeping it above the hips.

Keep the balance on the shoulders and the right hand, when stable, extend the left arm to the side, in line with the shoulder to counter the weight on the right. 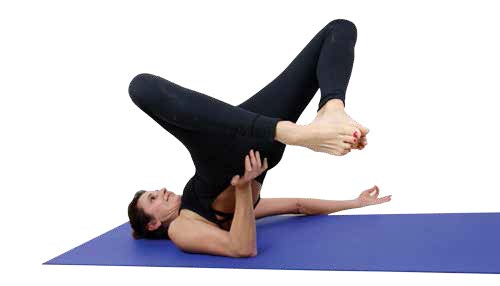 Bring the legs into butterfly position and allow the
knees to open sideways.

Below are the modifications of Eka Pada Parsva Sarvangasana available to different practitioners. 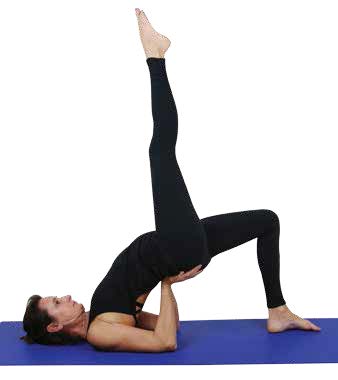 For those with limited movement in the hips and/or challenged by balance
Practice one-legged bridge pose to get used with supporting the weight of the leg.

For those with limited wrist extension / with current wrist injury
Practice this pose by resting the hips on blocks. Focus on extending and lowering the leg for an ideal hip extension.

The hand supporting the body can be turned outwards, so that the fingers are pointing sideways/holding the waist.

Neutralizing poses are important for long-term injury prevention; it allows the body to return to its neutral position. Be aware of pressure alert points and listen to your body – do neutralizing movements after slowly coming out of the pose.

As the body weight rests on the arms in this pose, the shoulder takes a lot of pressure in keeping the pose stable. 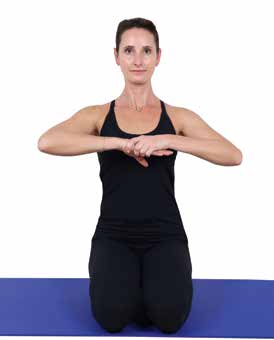 Hold the right fingers with the left hand in front of the chest with the elbows open to the sides and shoulders relaxed. Inhale and on exhale, gently pull on the right fingers. Hold for 3 counts and release; do the same stretch on the opposite hand. 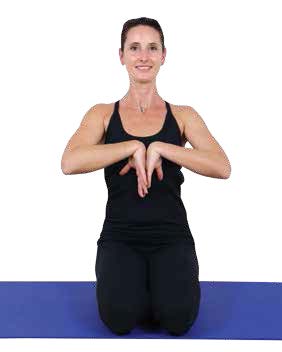 While in Vajrasana, bring the back of the wrists touching, in front of the chest. Inhale and on exhale, lower the shoulders and elbows. Hold for a few breaths and release the hands.

The below counter poses will relieve any tension created in the torso and hip area. 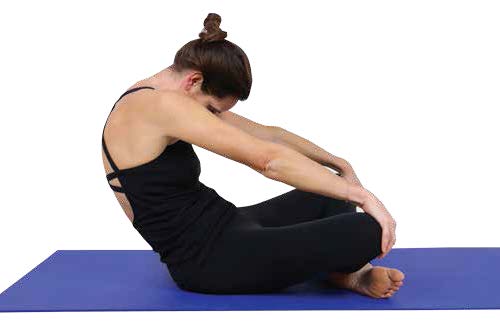 Sit in Vajrasana with the back straight and place the hands on the knees. Inhale and on exhale, pull the chest into a hunch and bring the chin to the chest.
Round the back and pull the abdomen in to hunch the back more. Stay for a few breaths and release the pose. 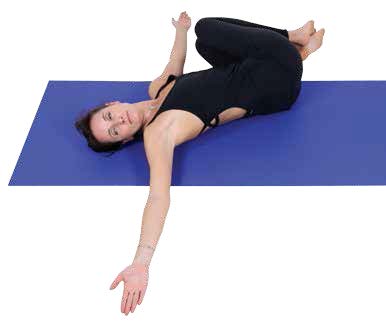 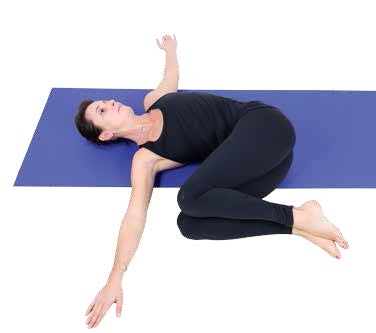 Slowly bring the knees back to the centre, and down to the right side. Look to the left and keep the left shoulder on the floor. 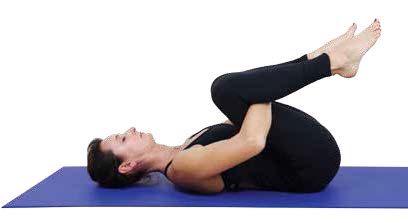 Lie down, start with the back flat and bend the knees. Inhale and on exhale, roll the hips up and bring the knees closer to the chest. Hug the legs under the shins and maintain the back of the head on the floor. To bring a light massage to the lower back, gently roll from left to right 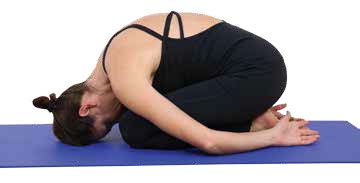 Namaskarasana / Salutation Pose
Come to Vajrasana or diamond pose by sitting on the heels. Inhale and lengthen the torso and upon exhalation, bring the body into a forward bend, extending the arms back. Keep sitting on the heels and let the forehead rest on the floor; allow the whole body to relax into the pose.
Stay for a few breaths and release the pose.

Our Vishuddhi Chakra is the centre of the sound, of our expression, and functions to purify the body through the breath. It is believed that an imbalance in this energy centre limits our ability to speak truthfully, to express ourselves, and also to be less receptive of others’ expressions.Physically, when we bring the chin down, the salivary glands are activated – more saliva is produced and this moistens the mouth. As an effect, a cool energy is released to the body. Doing poses like Sarvangasana activates this energy centre.As we try new/unusual poses such Eka Pada Parsva Sarvangasana, we either see these as easy or challenging. Our experience and practice would give us this judgment, but we will only know for sure once we have tried.
Practice with an experienced teacher and enjoy every step of the practice!