Dysmenorrhea is one of the most frequent gynecologic disorders, affecting more than half of menstruating women. Most adolescents experience dysmenorrhea in the first few years after the menarche. Primary dysmenorrhea is defined as pelvic pain around the time of menstruation in the absence of an identifiable pathologic lesion, present from menarche. It is a frequent cause of absenteeism and medical visits, and affects personal as well as economic aspects of life. It is estimated that severe dysmenorrhea results in the loss of 600 million working hours and $2 billion in lost productivity annually.

Although the etiology of primary dysmenorrhea is not completely understood, symptoms are generally associated with increased production of prostaglandins (PGs) in the endometrium with menses. Approximately 80% of patients experience pain relief by taking prostaglandin inhibitors, including proponics and phenamates.

Non-steroidal antiinflammatory drugs (NSAIDs) are widely used as first-line therapy in women with primary dysmenorrhea. Evidence based data supports the efficacy of ibuprofen, naproxen, mefenamic acid and aspirin. These agents, however, have side effects, of which gastrointestinal disorders such as nausea, dyspepsia and vomiting are the most common. Some patients with primary dysmenorrhea do not respond to treatment with NSAIDs or oral contraceptives. In addition, some women have contraindications to these medications.

Consequently, researchers have investigated numerous alternative/ complementary treatments such as herbal and dietary therapies, behavioral interventions, acupressure and aromatherapy. Ginger, the rhizome of Zingiber officinale, is a traditional medicine with anti-inflammatory and anticarcinogenic properties. It is a botanical general recognized as safe (GRAS) by the United States Food and Drug Administration (FDA)11 with no report of severe side effects or drug interactions in Germany’s Commission E Monograph. Ginger has been widely used in medicine, and has been administered in Traditional Chinese Medicine for more than 2500 years as an anti-inflammatory agent in musculoskeletal disorders. Two compounds in ginger, [6]-Gingerol and Gingerdiones, are potent inhibitors of PGs by blocking cyclooxygenase.

Traditional application of ginger to relieve symptoms of dysmenorrhea has been noted in several classical sources such as Kitab al Qanun fi Al Tibb by Ibn Sina (The Canon of Medicine by Avicenna). However, to the best of our knowledge, there are no reports of a controlled study of the use of ginger in dysmenorrhea. The aim of the present study was to compare the effects of ginger with mefenamic acid and ibuprofen for pain in women with primary dysmenorrhea.

Our findings showed that ginger was as effective as mefenamic acid and ibuprofen in relieving menstrual pain. Mefenamic acid and ibuprofen are the drugs of choice for treating primary dysmenorrhea, with up to 80% efficiency. Different theories exist regarding dysmenorrhea – inducing mechanisms, one of which is increased production of PGs in the endometrium. PGs originate from arachidonic acid in cyclooxygenase and lipooxygenase pathways. Studies have shown that the menstrual blood of women with dysmenorrhea has a greater amount of two PGs—PGE2 and PGF2. In women with primary dysmenorrhea, pain results from myometrial contractions induced by PGs (mainly PGF2) originating in the secretory endometrium. Antiprostaglandins such as NSAIDs can relieve dysmenorrhea pain. Mefenamic acid from fenamate groups and ibuprofen from propionic acids act as inhibitors of PGs synthesis. The question is why does ginger have similar effects as the other two drugs? In a search of the literature, we found no study that assessed the effects of ginger on dysmenorrhea; its use has been been based on traditional sources. However, the effects of other herbs such as fennel,16,18 cumin, and chamomile on dysmenorrhea have been studied. Like other herbs ginger compounds are very complex and include many substances such as carbohydrates, free fatty acids, amino acids, proteins, phytoesterols, vitamins (niacin), and some nonaromatic compounds such as gingerols and shogaols. Its essence mainly includes sesquiterpene.

Altman and Marcussen compared the effects of two ginger species (Z. officinale and Alpinia galangal; 510 mg twice daily) with placebo in patients with knee osteoarthritis and found that ginger extract had a significant effect on reducing symptoms of osteoarthritis. Salicylate has been found in ginger in amounts of 4.5 mg/100 gm fresh root. However, there was less than 1mg salicylate in the capsule in the study of Altman and Marcussen, so this could not explain the observed effects of ginger. In fact, ginger inhibits cyclooxygenase and lipooxygenase pathways in PG synthesis.

In pharmacopoeias, ginger is indicated for dyspepsia, distenssion, colic, vomiting, diarrhea, spasms and other smooth muscle disorders, for colds and influenza and for rheumatism as an anti-inflammatory agent. It has been shown that gingerols in ginger have anti-inflammatory effects both in vitro and in vivo. The antiinflammatory property of ginger has been attributed to the inhibition of cyclooxygenase and lipooxygenase, leading to a reduction of leukotriene and prostaglandin.

Considering this evidence, it seems that ginger has anti-prostaglandin effects similar to those of mefenamic acid and ibuprofen. Gingerols may be the principle active ingredient for these effects. Measuring PGs in plasma or menstrual blood throughout the treatment may help to clarify the mechanism of action of ginger on primary dysmenorrhea. Dysmenorrhea is sometimes associated with nausea and vomiting.

The efficacy of ginger in the treatment of chemotherapy induced delayed nausea and nausea and vomiting in pregnancy and after surgery has been reported, with minor side effects. It has been reported that more than 6g of dry powder of ginger can cause desquamation of the epithelial cells in the stomach lining of humans. Therefore, the dosage should be limited to less than 6g on an empty stomach. It can also result in sensitivity reactions, dermatitis and, at high doses, in depression of the nervous system as well as cardiac dysrhythmia.

Although there is no evidence regarding the drug interactivity of ginger, NSAIDs, particularly aspirin, have the potential to interact with herbal supplements, and further research is needed to confirm and assess the clinical significance of these potential interactions. There are some limitations to this study. Because randomization was not easily possible, patients were alternately allocated into the groups. However, all three groups were similar in baseline characteristics.

Although participants could not determine whether they received a ginger or other capsule even after examining, smelling, and swallowing, questioning participants as to whether they thought they had received an active treatment or a placebo could specify a double blind setting. We did not assess other possible symptoms associated with dysmenorrhea; that is suggested for future studies. Also, using measurements such as the visual analogue scale or the numeric rating scale for assessing symptoms may help to find minimal differences between the groups.

Ginger is as effective as mefenamic acid and ibuprofen in relieving pain in women with primary dysmenorrhea. Further studies regarding the effects of ginger on other symptoms associated with dysmenorrhea, the efficacy and safety of various doses and treatment durations of ginger, and the exact mechanism of action are warranted.

Ginger is used so widely in ayurveda that it is an entire medicine chest in itself. There is an ayurvedic sutra (verse) that says that everyone should eat fresh ginger just before lunch and dinner to enhance digestion. Not only does ginger stoke the digestive fire, but it also whets the appetite, improves assimilation and transportation of nutrients to targeted body tissues, and clears the microcirculatory channels of the body. The few situations in which ginger is contraindicated are in cases of hyperacidity, during any form of hemorrhage (including menstruation), vertigo and chronic skin disease.

Other than these, ginger is an excellent spice that can be used daily. Traditional ayurvedic texts recommend ginger for therapeutic use for joint pain, motion or airsickness and clearing the microcirculatory channels to facilitate better absorption of nutrients and better elimination of wastes. Modern science, by way of worldwide research, ratifies its effectiveness in preventing motion or airsickness, improving digestion, and for its pro-analgesic effect on the joints, particularly in the early stages of rheumatoid arthritis. If you can eat raw ginger, a good way to take it is to dip two or three thin slices of ginger in a little salt and lime juice and have them before a main meal. 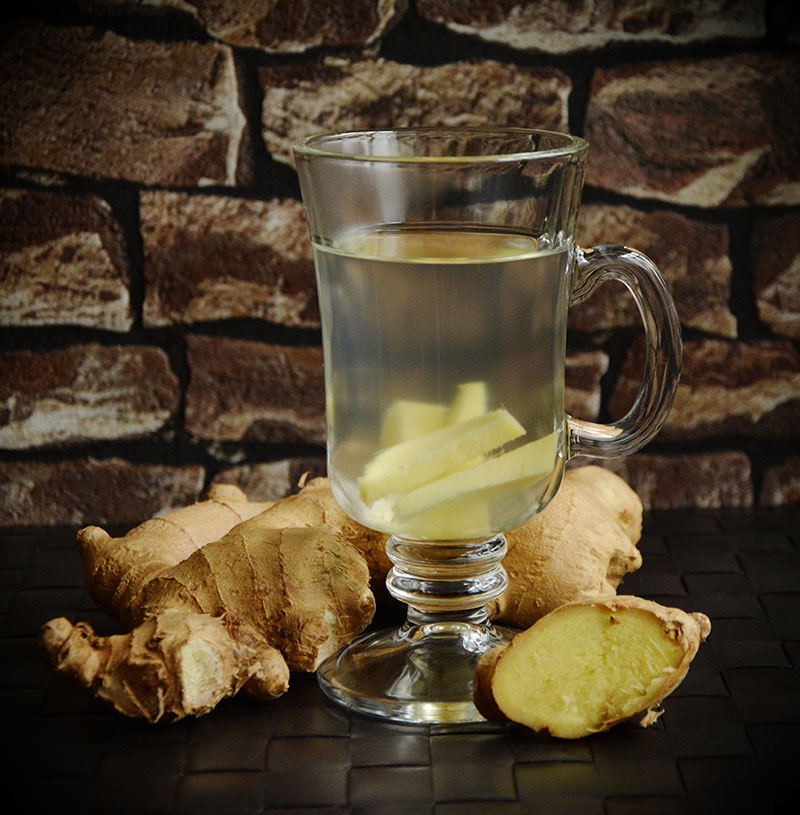 If you find ginger hard to eat raw or by itself because of its pungent taste, consider adding two or three thin slices to your vegetables or lentils as they cook. Another way to eat ginger is to sauté some grated ginger in a tablespoon of ghee and add the mixture to warm milk (add sweetener if you like), desserts or other dishes.

Ginger may be powerful weapon in the treatment of ovarian cancer. A study conducted at the University of Michigan Comprehensive Cancer Center found that ginger powder induces cell death in all ovarian cancer cells to which it was applied.

Ginger contains chromium, magnesium and zinc which can help to improve blood flow, as well as help prevent chills, fever and excessive sweating.

A study at the University of Minnesota found that ginger may slow the growth of colorectal cancer cells.

A review of several studies has concluded that ginger is just as effective as vitamin B6 in the treatment of morning sickness.

Ginger has been shown to be an effective remedy for nausea associated with motion sickness.

One study showed that ginger has anti-inflammatory properties and is a powerful natural painkiller.

Ginger has long been used as a natural heartburn remedy. It is most often taken in the form of tea for this purpose.

Research has shown that ginger may provide migraine relief due to its ability to stop prostaglandins from causing pain and inflammation in blood vessels.

In Chinese medicine, ginger tea with brown sugar is used in the treatment of menstrual cramps.

A study done on diabetic rats found that those rats given ginger had a reduced incidence of diabetic nephropathy (kidney damage).

Ginger helps improve the immune system. Consuming a little bit of ginger everyday can help foil the potential risk of a stroke by inhibiting fatty deposits from the arteries. It also decreases bacterial infections in the stomach and helps battle a bad cough and throat irritation.

If you want to get all the amazing health benefits of ginger, we recommend New Chapter Ginger Force. It is an organic, full-spectrum ginger extract that contains compounds not found in other ginger supplements.

Cold and Flu Prevention and Treatment

Ginger has long been used as a natural treatment for colds and flu. Many people also find ginger to be helpful in the case of stomach flu or food poisoning, which is not surprising given the positive effects ginger has upon the digestive tract.