Make Surya namaskar a key part of your practice. By Hongyi Huang

There’s been a changing attitude towards incorporating Surya Namaskar as part of a full sequence in a class. Also known as Sun Salutation, it is a series of transitional poses typically used for warming up at a start of a vinyasa practice. With new trends and ideas emerging within the yoga world, its significance and priority have begun to falter. Even though many are familiar with the practice of Surya Namaskar, few today hold it as an essential part of their sequence. Hence why, it’s worth reminding ourselves of how the Sun Salutation came about, its evolution and benefits and why it should remain as an irreplaceable part of our practice.

There’s debate over how the practice of Surya Namaskar originated. Some say that the sequence dated back to Vedic times, at least 2,500 years old, and evolved from a ritual prostration to the dawn while in a study conducted by Chris Tompkins, he traced the practice back as early as 100 CE, to a sect from the Tantra tradition called Pasupats who performed linked poses inspired by a sacred dance for a devotional ceremony. There are also others who say it was invented by the Raja of Aundh (a former state in India now part of Maharashtra) in the early 20th century and spread to the West around the 1920s and 1930s, despite the Raja claiming that this practice was already in existence then.

What’s widely agreed is that Surya Namaskar is popularised by the guru, K. Pattabhi Jois, a disciple of Krishnamacharya and founder of Ashtanga Vinyasa, who was using the sequence in his yoga routines and evolved it to the form that is best—known today.

What does this mean?

“Surya” means ”sun” in Sanskrit while ”Namaskar” derives from the word ”nama” which means ”to bow”. As such, it’s commonly referred to as Sun Salutation in English too although a fuller expression would be ”to bow with reverence to the sun”.

Generally, one can assume the mention of Surya Namaskar to mean Sun Salutation A or B from the Ashtanga Vinyasa Primary Series. The asanas (aka pose) used in each sequence and their benefits are listed below and each inhale and exhale are specific and matched to each pose or transition to support greater extension or deeper stretching:

Adho Mukha Svanasana (Downward Facing Dog Pose): Helps to build strength in the upper body and arms. Encourages chest to open and supports stretching along the back body. Tones thighs whilst stretching hamstrings and calves.

A longer sequence of version A with the addition of these two postures.

Virabhadrasana I (Warrior 1 Pose): Strengthens hips, groin and legs, and tones the core and arms.

Promotes lengthening of the spine as well as the stretching of the chest and shoulders. 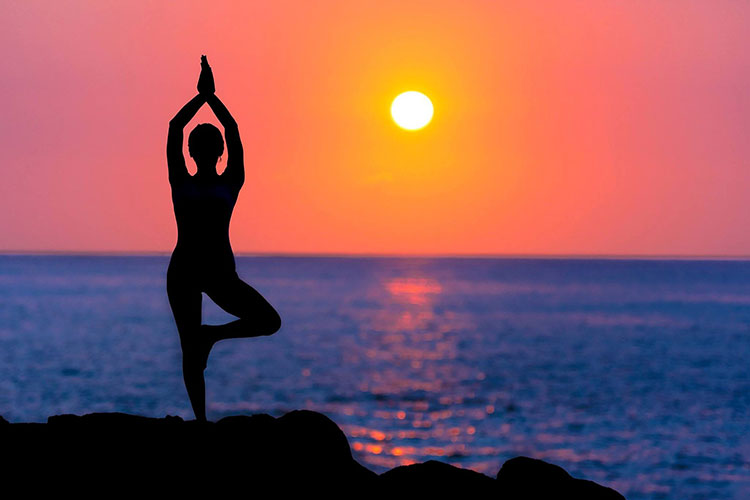 The most amazing feature of Surya Namaskar is that it engages such a wide range of body movement — flexion to extension, concentric, eccentric and isometric muscle contractions — each pose has its counter—pose to maintain balance, all of it helping to lubricate the joints, tone, strengthen and build flexibility in the body. It helps to raise our physical awareness whilst encouraging and supporting the distribution of energy and oxygen throughout.

In the West, we tend to view warm—up exercises as gentle and even though Surya Namaskar is typically used for warming up, this is an inaccurate assumption. By altering the speed of the sequence, a practitioner can change the physical benefits quite differently, for example quickening the transitions will boost cardiovascular engagement and increasing the time each posture is kept will activate the isometric muscles even more.

In the Mysore Ashtanga Vinyasa, Surya Namaskar is typically practised as part of the Primary Series around dawn, just as the sun is rising, however, it’s common and widely accepted to practice at any time of the day. Despite so, it’s worth remembering its purpose — to honour the sun for its energy and for giving light and life to a new day. We began Surya Namaskar with the “Anjali mudra”, a symbolic hand gesture that guides energy flow in the body. This action of hands coming together in prayer at the heart instantly alters one’s emotional state, bringing a sense of contemplation and respect.

Several of the subsequent poses continue this feeling — from “Anjali mudra”, the arms extend skywards for Urdva Hastasana evoking a sense of surrender, it’s then followed by Uttanasana, a forward bend, akin to bowing which brings feelings of humility. It is why many consider Surya Namaskar to be a moving meditation in essence; to execute the sequence optimally, it requires total mindfulness and connection to body, breath and spirit.

Because the practice of Surya Namaskar has existed for so long, it’s natural for practitioners to have sought newness. But rather than creating a sequence from scratch, what makes Sun Salutation so unique is also its versatility. Currently, there are around 24 recorded versions of Surya Namaskar, evidence that the sequence is open to interpretation. An easy approach to evolve the sequence is to use Sun Salutation A or B as foundation and build from them, for example from Virabhadrasana l in Surya Namaskar B, a practitioner can add on more standing poses like Virabhadrasana ll (Warrior || Pose), then Uttitha Trikonasana (Extended Triangle Pose). It is this versatility that makes Surya Namaskar a key element for linking new and additional asanas together to create a smooth vinyasa sequence and establishes it as an essential part of a practice.

Biography: Hongyi’s interest in yoga began in his 20s. He was practising Iyengar yoga back in his birth home and found that it relaxed a hyper and overactive mind. After moving to London, he discovered that there were a myriad of styles and began to explore the different types of yoga the city offered. He has been practising the vinyasa style since and appreciates the dynamism and physicality as well as calming qualities. He embarked on a teacher training to deepen his knowledge and practice, and found his interests piqued by the ancient teachings and its application to modern life. Today, he maintains a regular vinyasa practice and continues to explore the subjects presented by yogic philosophy in modern context.