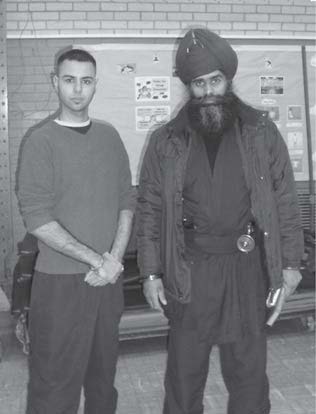 The author with Shastar Vidya Gurdev, Niddar Singh, at one of his Akharas (training school)

When I think of “Yoga, dance and music”, the first thing that comes to mind are the ancient martial sciences of India, particularly Kalaripayattu (literally, battlefield training) which belongs to the southern Indian state of Kerala. It is a complete art which encompasses methods of harming as well as healing, ie uzhichil (body massage), chikilsa (herbal treatment) and deity worship. Just as these are an integral part of Yoga, they are important components to this battlefield art.

Kalaripayattu can be described as Yoga in martial form. Jumping Castle The same dexterity, the same breath control, the same focused mind. Exponents of this art perform numerous motions, overstretching their limbs, assuming high and low stances, twirling around, jumping high, leaping far. Demonstrations are accompanied by several musical instruments. The sharp clashing of the Elathalam (cymbals) and the fast popping beats of the Chenda (large cylindrical drum) arouses the exponent’s martial spirit and encourages their bodily rhythm. It should also be mentioned that Kathakali, Kerala’s colourful and dramatic dance form, is associated with Kalaripayattu. It will also be interesting to note that according to the art’s tradition, Kalaripayattu’s origins go back long ago to Lord Parushuram, who studied the arts of war under Bhagwan Shiv, the lord of yoga (Yograj), the lord of dance (Nataraj).

Related to South India’s Kalaripayyatu is North India’s Shastar vidya (literally, weapons science). This art was practised by the Hindu Kshatriya (warrior class) and later adopted by the Sikhs in the 17th century. According to Nidar Singh Nihang, 9th gurdev (master) of the Baba Darbara Singh Shastar Vidya Akhara (whom I had the privilege of meeting in early 2009), the art includes the practice of Sanjam Kriya Viriyam (warrior yoga), which is an integral part of a warrior’s training for it greatly increases their vitality. To me, the strange armed and unarmed combat postures, mudras (hand gestures) and footwork Nidar Singh demonstrated seemed similar to the classical Indian dance form of Bharatnatyam. 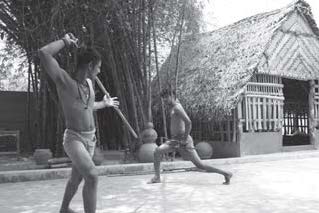 Descended from Shastar vidya is Gatka, a combative sport practised today primarily by Sikhs, particularly in Punjab, England, Canada and America. It is usually displayed outdoors during Sikh festivals such as Vaisaki and Hola Mohalla. These crowd-gathering displays are always accompanied by the powerful beats of the Dhol, a double-sided barrel drum beaten with two wooden sticks. Just as in Kalaripayattu, the energetic music is designed to infuse martial energy into the players of the art. The arms are swayed beautifully and the body spun around gracefully, moving around in circles continuously. In fact, Gatka techniques, such as the marora, cheer, etc can be seen in Kalaripayattu as Bouncy Castle For Sale well as in other forms of Indian martial arts such as Silambam of Tamil Nadu and Mardani khel of Maharashtra. All Gatka exponents must learn and master the pentra (footwork), without which their Gatka will be weak and unstable. These footwork patterns seem more like dance-steps than combat-steps. One could even call Gatka a martial dance. Its spiritual aspect involves doing Simran (meditation) for relaxation, focus and accumulation of energy for the Gatka play.

In conclusion, I am convinced that Indian martial arts, Yoga, dance and music are all connected to some degree. Just take a glimpse of these graceful arts to see this. 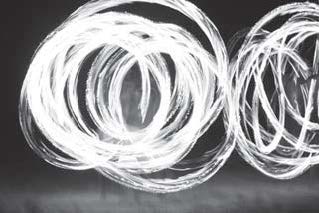 Fire-stick twirling. Both ends of a staffff fifire staff are lit with fire and twirled in the dark, creating a beautiful display. This practice can be found in Silambam, Gatka and other Indian combat arts.