It’s no secret that yoga has lasting benefits when it comes to reducing stress, anxiety and depression in adults. So why not look at the benefits for teens?

A study conducted in 2012 from Brigham and Women’s Hospital and Harvard Medical School followed 51 grade 11 and 12 high school students (ages 16-18) over a 10-week period. Some of the students participated in a yoga physical education class, and some in a regular physical education class. The yoga class was led through asanas as well as meditation, relaxation and pranayama exercises.

The result? Mood problems, anxiety and negative emotions stayed the same or improved among yoga students, but grew worse among those taking regular PE. And nearly three out of four said they’d like to keep on doing yoga. “Yoga may serve a preventive role in adolescent mental health,” says lead researcher Jessica Noggle, PhD.

Yoga may help teens learn to deal with stress because of its emphasis on being present through relaxation, mindfulness and breathing.

Hong Kong is known for its fast-pace, high achieving and overscheduled lifestyle, and students are not immune to the frantic energy of this city. Among them, 300 had had suicidal thoughts.” According to the Suicide Centre for Prevention and Research, “Suicide is one leading cause of death for those aged 15-24 in Hong Kong.” The main source for anxiety, as stated by The Student Standard, “is academically related.”

What can schools do, then, to manage stress and academic-related anxiety among students?

Daun Yorke, the International Baccalaureate (“IB”) Diploma Program (“DP”) Coordinator at the Canadian International School of Hong Kong (“CDNIS”) in Aberdeen started an initiative in 2011 at the DP level which introduced the practice of mindfulness at the start of grade 11 at the IB Retreat, held annually for students starting the program.

Yorke, trained in Mindfulness Based Stress Reduction (“MBSR”), asked Nasci Lobo, staff member and yoga instructor, to lead sessions on balance and relaxation. Over the course of the school year, Yorke incorporated additional sessions for grade 12 students during weekly advisory meetings focusing on relaxation, laughter therapy and lessons on perspective. 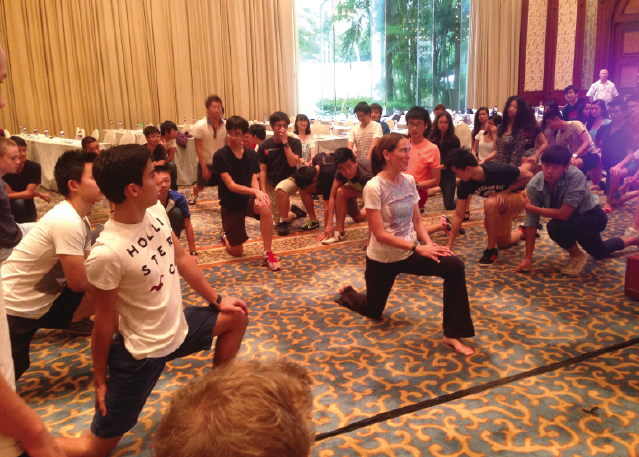 Her commitment to ensuring her students are well-balanced and managing stress during these intense two years has led her to focus on mindfulness as part of a pilot Bouncy Castle For Sale in the IB’s Approaches to Teaching and Learning.  Part of this focuses on social and emotional learning.  The Self Management Affective Skill work being done with Mindfulness is being documented as part of this pilot and is being shared with the IB development office at The Hague.

Prior to CDNIS’s IB retreat, yoga was offered on an ad hoc basis in Physical Education (“PE”) classes with Lobo. Some students had taken yoga classes outside school prior to the school initiative, but as a result of this introduction, they found enough benefit to request a yoga club be started. Maddie, a 2013 graduate was among the students pushing Lobo to begin a club. “I’ve really been thinking about what you said in regards to yoga helping you mentally, and with the exams and all the overwhelming things coming our way I really wish to do more yoga. It doesn’t only help me mentally but it can help me with my injuries.”

Lobo conducted several club sessions in the spring of 2013, exposing students to asana, pranayama and meditation. The club continues during the current academic year. Additionally, PE teachers continue to expose students to yoga in their classes. Most students were surprised at how demanding and rigorous the asanas could be. Many knew of yoga as a gentle activity not requiring much effort.

“I really enjoyed the yoga, it relaxed me for the rest of the day which was really nice.” Karl, a current grade 12 student, asked Lobo for additional asanas that he could work on at home, specifically to help strengthen his ankles following the PE sessions.

One of the most revealing personal accounts comes from Valerie, a grade 11 student, “Before I knew what yoga nidra was – or even started yoga for that matter – I often found myself very uncomfortable in my own skin.         I didn’t like my appearance, I felt very distant from my mind, I wasn’t very aware of what was going on around me. I threw myself into TV shows a lot. It really distanced me from myself. I know that I watched many of these videos because I wanted to escape the reality that I lived in – where there is a constant flow of work, numerous social problems and pressure to succeed.

“When I finally started doing yoga, I have since discovered a lot more of myself. (I) feel that (I am) more of a solid existence in the world, rather than just being a pair of hands and an alien voice. After practising for about a year, I’ve been feeling both physically and mentally stronger and more balanced – as well as being more confident in who I am. It’s fun moving in my body now!”

She further confirms the initiative at school, “Coming out of yoga nidra specifically, I find that it alleviates literally all of my stress and gives me a good night’s sleep. I have a habit of overwhelming myself with so much work that I can just barely manage, but after going through those exercises as well as others that relate to breathing, it helps with calming me down. It gives me a moment to not only reconnect with myself, but also repair my body and psyche.

Upper School Guidance Counsellor Heather Sheridan, a certified yoga instructor with a focus in yoga for relaxation and teen yoga and MBSR trained, has expanded the offerings this year.

In her 20-minute Mid-week Morning Relaxation sessions prior to the school day starting, she takes grade 9-12 students and staff through breath and body awareness techniques, concentration techniques and simple yoga nidra to begin their day. A core group of participants that attend weekly attests to the benefits they receive, particularly given that the sessions are voluntary. Valerie adds, “Being a teenager in the 21st century, I think it’s important to realise that it’s not just all about the social and academic dimensions of life.  What about your own personal one – of which all other dimensions are rooted in? There’s gotta be a strong foundation to build a great, majestic building. And I strongly believe that these Jumping Castle practices are one of the biggest keys to building that for ourselves.” Based on the positive feedback, sessions are being started to include grade 7 and 8 students.

CDNIS complements these in-school programmes with learning outside the classroom. For the past two years, a trip to Bhutan that included twice daily meditation sessions led by monks, is one option in its CAS Week trips, a week of creativity-, action- and service-based trips Upper School students participate in annually. Students prepared for the trip in advance by working with Sheridan on Focused Attention meditation.  The trip was filled to capacity with grade 11 and 12 students further supporting the need for inner calm in a competitive academic program.

CDNIS is not alone in Hong Kong or the world in taking on yoga and mindful meditation as a way to create spaciousness in a secondary school student’s frenetic schedule. In Hong Kong and across Asia, more schools are accessing their faculty who are specifically trained to provide students with the tools that will help them self-manage stressful times, hopefully taking it beyond the school boundaries and into the world.

One thought on “Mindfulness and Yoga in School”