In my journey into yoga which began six years ago, I have been fortunate to have the guidance of many wonderful teachers. Doorways kept opening, clarity kept happening. In my study on yoga I often read articles by Sadhguru (founder of Isha Yoga Foundation) and listened to his you tube talks. He fascinated me because he did not come from a family of yogis. His father was a physician. He has been married and has raised a daughter. He seemed to belong to a background that I could relate with. Sadhguru says he was a skeptic and grew up on European philosophy Camus, Kafka, Dostoevsky. Spirituality was not something up his alley. Considering that this came from a man whose mission became “one drop of spirituality for every human being” immediately drew me to him! Add to this, unlike our saffron clad gurus, Sadhguru rode a motor bike and  flew a helicopter which piqued my curiosity about this man. When questioned about his image he has said “I also ride bullock carts but no one reports  that!” He says that a lot of his work is in rural India and the traffic is so bad that he decided to take some time off to learn to fly a helicopter and get a license! He asks if a chauffer can drive a car, why cant I?! 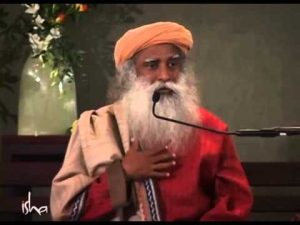 Sadhguru to me is an enlightened, self realized being. He is sought after by prestigious global forums today such as the United National Millennium Peace Summit, The Australian Leadership Retreat and the World Economic Forum. He has established the greatest meditative space called the Dhyanalingam at Coimbatore India, which has been described as a pure energy form that has all the seven chakras vibrating at their peak. Anyone who comes into its vicinity will experience deep meditative state.

His explanation on yoga, its practice and a commitment to revive classical hatha yoga has kept me drawn to his work. Some of the things that he said struck a chord with me. Yoga for me has been about getting in touch with the creator within me, to manifest the life that I want and he explained this so well:

“ Right now what you call as ‘myself’ you actually gathered over a period of time. In terms of mind it is a heap of impressions. In terms of your body it is a heap of food that you have eaten. So you gathered this. What you gathered is yours but can it ever be you? Then what is the “you” beyond ‘yours’.  This ME is not a simple ME. This Me can make a banana into a human being! So the choice is either you can exist here just as a piece of creation or you can exist here as the creator himself.” 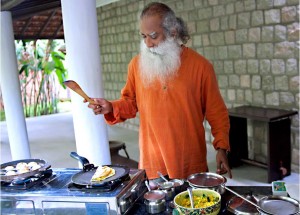 For those of us familiar with the Koshas as explained in yoga texts, I understood it in the best way in how Sadhguru speaks on the first three koshas:

In yoga, we look at the human body as five sheaths. The first sheath is called annamaya kosha or the “food body,” because what you call as the physical body is just a heap of food. The second sheath is called manomaya kosha or the mental body.  Every cell in the body has its own intelligence and this is manomaya kosha. These two layers can only function in connection with the third dimension, the energy body or pranamaya kosha. You can compare this to computers today – there is hardware and software, but Bouncy Castle by themselves they cannot do anything unless you plug the computer into quality power.

Pranamaya kosha is the dimension in which most of the yogic practices function. If you keep your pranamaya kosha in perfect balance and fully activated, there can be no such thing as disease either in your physical or mental body. Keeping the energy body in full flow is not about doing healing or things like that. This is about going to the foundations of your energy system and activating it in a proper way by building a foundational yogic practice that establishes your energy in such a way that your body and mind are naturally fine. 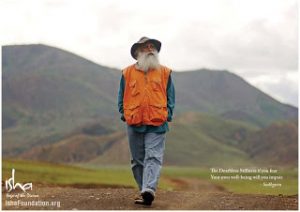 In his work the energy dimension is given great importance. Sadhguru offers practices based on understanding of inner science to harness human potential to the fullest. He speaks of the inner science as just a technology, explaining that converting mud into food is agriculture, converting food into body cells is digestion and similarly converting a stone into divine is consecration. The spiritual process is a process of inner consecration, to transform this flesh and bone into a much higher possibility. You may not know what is the ultimate possibility, but you know that the same flesh and bone can function in different dimensions. It can be just a mass of flesh, it can become joy, love, hatred, misery – so many things.

Listening to Sadhguru’s thought provoking talks and explanations that made familiar ideas crystal clear got me interested in visiting the Dhyanalingam. A mother of 10 year old twins I suggested to my husband we plan a trip, go to Kerala and also visit Coimbatore. But with flight changes, family to coordinate with back in India and kids involved it did not work out and I thought maybe it was not time yet. Weeks passed and one fine day my husband suggested that I visit by myself. I couldn’t even imagine leaving the kids and going off like that. But my husband assured he could manage and I had to only arrange with my part time helper to stay back for those days. I felt like this was Dhyanalingam calling me and clearing my way! As luck would have it, that weekend turned out to be the guru poornima weekend and Sadhguru was expected to be in Coimbatore at that time.I had not really planned to go on Guru Poornima but things just placed themselves like that. I felt blessed…totally in grace.

Ten year ago I was not the person that I am today. Generally given to getting stressed quickly and being short tempered I often felt I did not do as good a job of mothering as I could have done. Having twins to raise did not make it any easier for me. Perhaps if I was a little more tranquil or had managed my energies better I could have been a better mother. Even when my kids were small there were times I just lost it and always regretted it. If I was given the choice to change one thing in my life, I would have loved to reverse that. So I set an intention before I left that if there was any ill effect on my kids because of my “lack” may that be reversed. Something in Bouncy Castle For Sale me was asking for forgiveness from deep within.

As I sat in anticipation on 30th July on Guru Poornima night for the Satsang to begin and for Sadhguru to arrive, I softly repeated my intention in my mind. As Sadhguru walked up the dias he began with a chant to Shiva. A chant that is one of the first I learnt in my spiritual journey and had felt deeply connected to. To hear him say it loud among all the innumerable chants to Shiva and only those lines that I most connected to was a surreal feeling. It was as if he was only talking to me even though there were 10,000 people there that day. Tears rolled down my eyes as I experienced this perfect tuning to the universe. It was for me an experience of a guru’s presence and it left me overwhelmed.

I held on to every word he spoke and basked in the insights shining down from him. It was a question answer Satsang with him that day. He was asked if there really was a need for a guru. As always his wit and wisdom is captivating! He asked  in his rhetorical way : when you walk in unchartered territory do you use a GPS?! It is sensible to use a navigation system in unknown territory. Guru is also like that, a navigation system – GPS– Guru Positioning System. Of course if one is adventurous one may decide not to use it but what could take little time may become a seemingly endless journey.

He was also asked “What can one do for a guru? It seems I am always taking from a guru and not giving anything in return” He replied : you just take, take and take. Don’t take and throw, take and throw!

I felt a definite change in me after I returned from the Satsang in my perception and clarity as if some veils covering my light had dropped. I continue to be guided by his light! Wishing you all the grace of a guru. I found mine on facebook No forests to trek, no seas to cross!

Swati Pandey is a keen student of Yoga. She has completed 400 Hrs Teacher Training from Anahata Yoga, Hong Kong and continues to pursue further Teacher Training and workshops with Manoj Kaimal, founder Manasa Yoga, Kualalumpur. Swati is passionate about sharing yoga and teaches regularly in Kualalumpur.