This month’s featured pose is an advanced variation of Salamba Sirsana or supported headstand. In this pose, increased body awareness is needed as this pose incorporates a deep hip flexion and rotation, while being in an inversion.

Inversion poses are beneficial to the practitioner as they send a refreshing boost of energy or prana to the brain. Blood circulation in the head and upper body is improved, therefore reducing nervous disorders and improving and stabilizing one’s emotional state.

The below warm-up poses focus on lengthening the spine and improving the rotation and flexion of the hip. 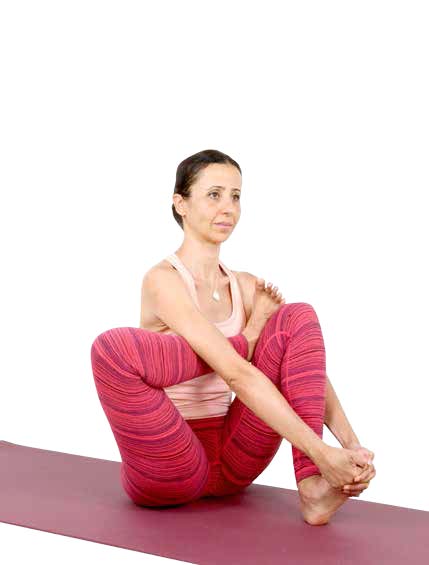 1. Sit on the floor with the legs outstretched and hands behind the hips, fingers pointing backwards.
2. Bend the right knee sideways and bring the right ankle to the left thigh.
3. Bend the left knee and slide the left heel in, keeping the foot flat . Keep the right knee pointing sideways and the left knee pointing upwards.
4. Lift the torso so that the legs move closer to the chest.
5. Raise the arms and slowly reach around the left leg to hold the foot.
6. Hold the pose for a few regular breaths. To come out of the pose, release the hands and slide the left leg to straighten. Repeat the pose on the other leg. 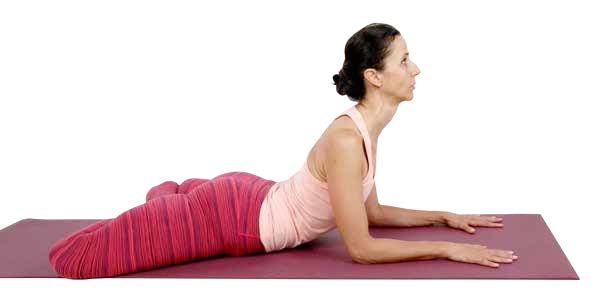 1. Lie down on the floor. Lift the legs and guide the legs into Padmasana.
2. Slowly move the legs forward, aiming for the shins to touch the floor. Avoid letting the lower back come up off the floor into a wide arch.
3. Keep the torso on the floor in the spine’s natural position. Hold the elbows and raise the arms above the head.
4. Stay in the pose for a few regular breaths.
5. To come out of the pose, first release the arms, then the legs.

Variation – use of block

1. Put one block to the side and lie down on the floor. Bend the knees and keep the arms by the sides of the body.
2. Raise the hips and slide the block under the body and rest your sacrum on the block.
3. Move the legs into Padmasana, crossing one leg over the other.
4. Slowly lower the legs to the floor while keeping the sacrum on the block. Avoid arching the back so that the chest or hips are raised.
5. Once the knees are on the floor, raise the arms above the head and hold your elbows. Keep the shoulders on the floor. 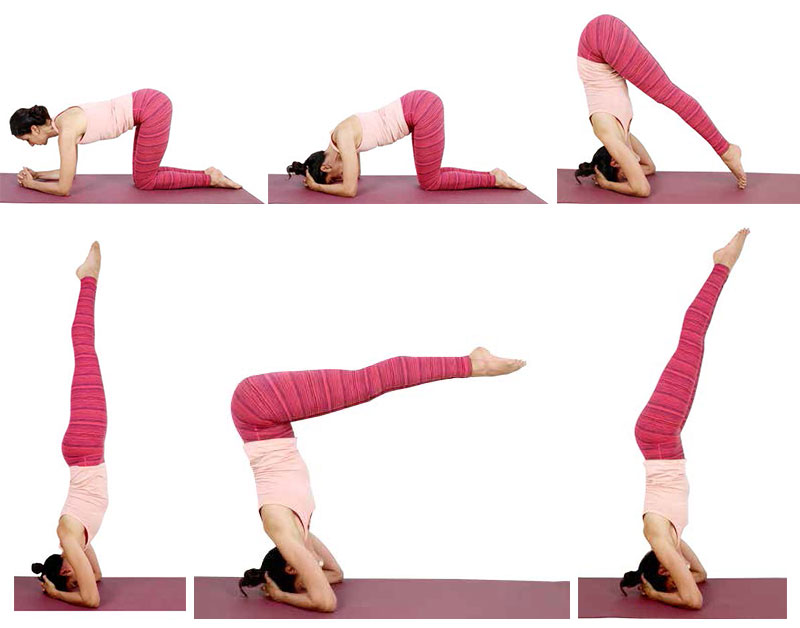 Come down to the elbows and knees, toes tucked. Hold your elbows and keep them in place. Interlock the fingers (option to lock the thumbs or keep them separated). Place the top of the head on the floor, with the hands supporting the back of the head. Inhale and on the exhale, straighten the legs and walk the feet closer to the body. Engage the abdomen and slowly raise the legs together. Raise the legs gradually to be in line with hips, and raise them up slowly to bring the body in one straight line, stacking the legs above the hips.

1. Come into Salamba Sirsasana as described in the Eligibility Pose section. 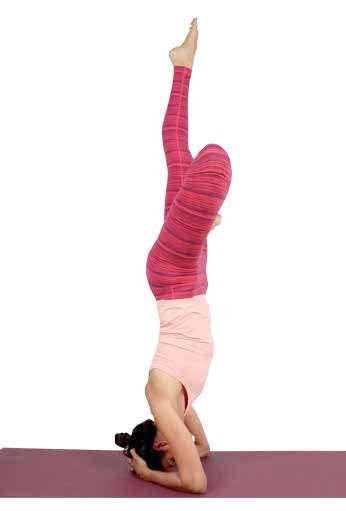 2. Bend the right knee sideways and move the right foot close to the left side of the hip. 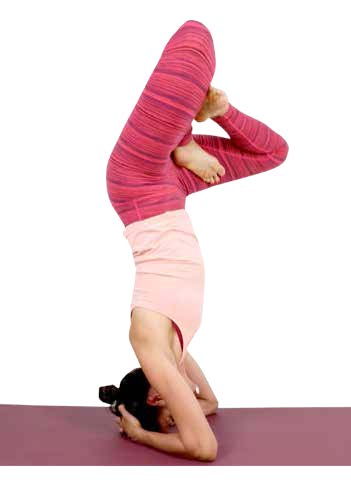 3. Bend the left knee sideways and bring the leg over the right shin, the left foot aiming to reach the right side of the hip. 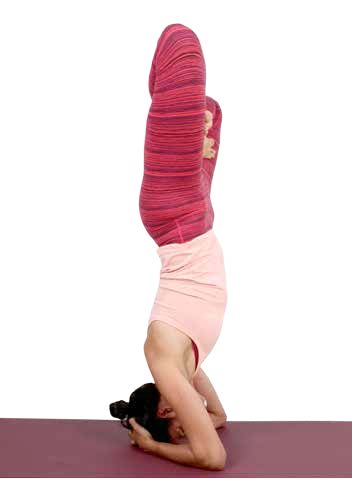 4. With the legs in Padmasana, raise the knees above the hips. 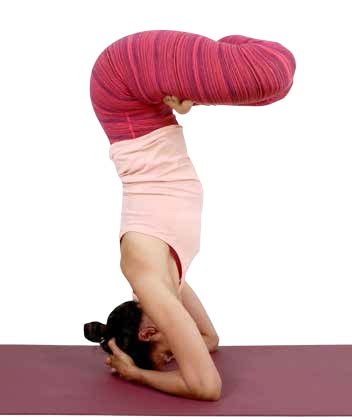 5. Keep the body stable and engage the back abdomen; slowly lower the knees to be in line with the hips. 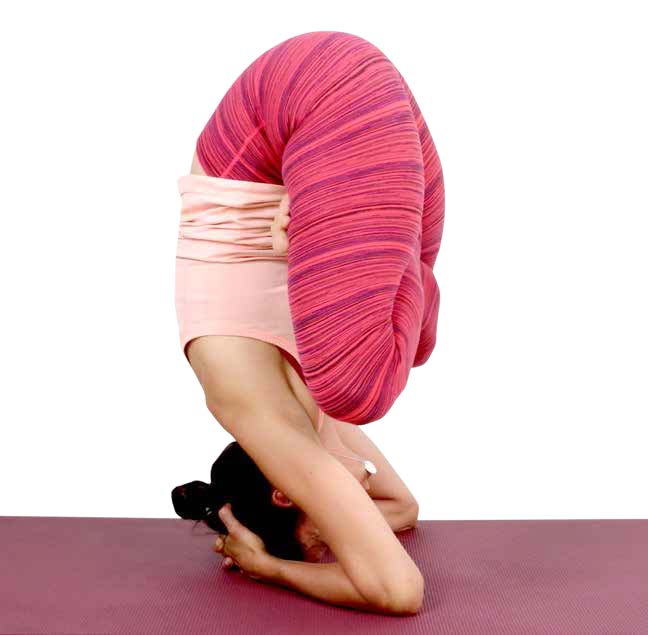 With control, lower the knees towards the chest and round the back to support the weight of the body.

There are many ways an asana can be performed or interpreted depending on each practitioner, and classic Hatha
Yoga text suggests that there are over 8 Million poses.
Below are two variations which can provide similar physical and mental benefits to the practitioner. 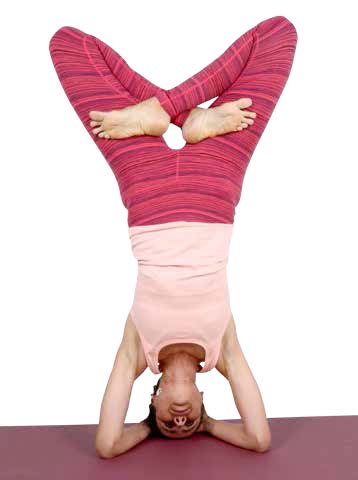 Keep the body upright with the legs above the hips and the shoulder engaged to support the inversion. 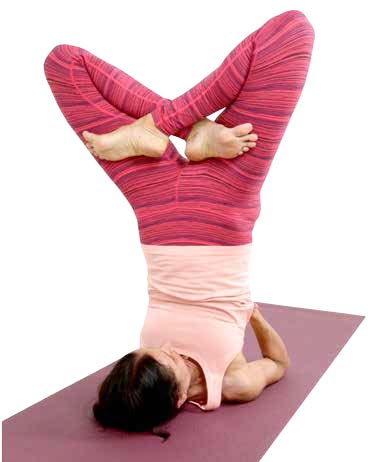 Instead of Sirsasana, come into Sarvangasana/Shoulderstand. Once upright, bring the legs into Padmasana.

The below modifications are available for different practitioners: 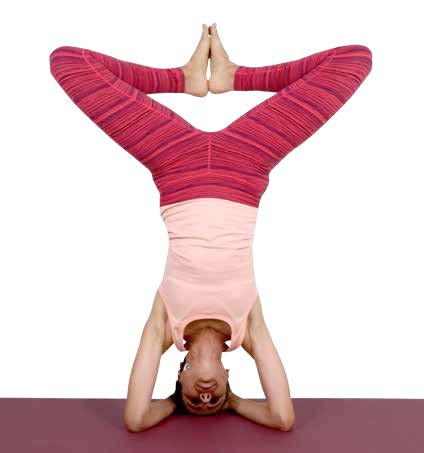 For those with limited hip rotation and flexion 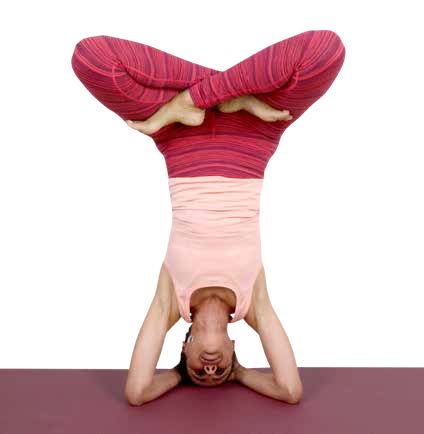 For those challenged by hip flexion or shoulder retraction movement

From Step 3 as described earlier, slightly lower the knees to fold the hips and stay in this pose. This does not require as much hip flexion or rounding the back as the spine is erect and the legs are lifted. 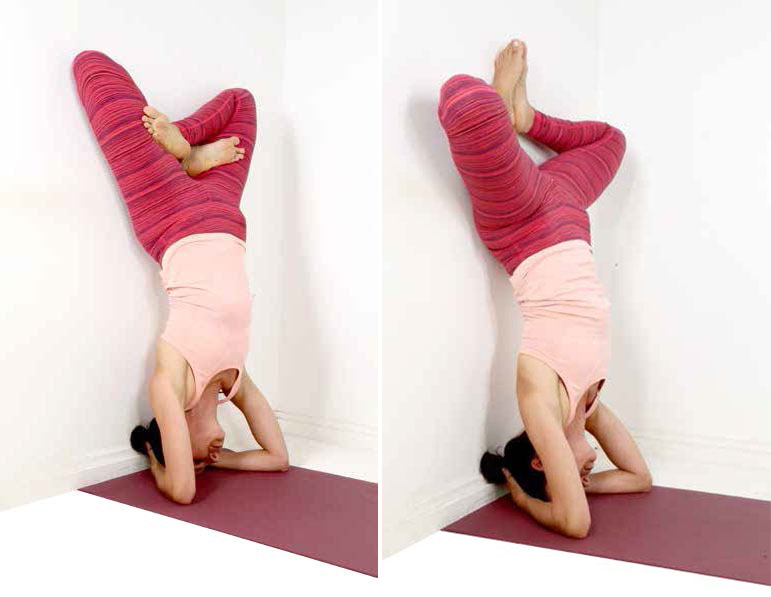 The above two poses can also be practiced against a wall. It mainly for those who find balancing in Sirsasana a challenge. Having the wall as support takes away the fear of staying upright in an inversion.

Start on the floor, next to a wall. Interlock the fingers and allow some space between the knuckles and the wall. Come into Salamba Sirsasana and rest the heels against the wall. Arch the back and push the chest away from the wall, until the hips and legs are against the wall. With control, move the legs into either Butterfly pose or Lotus pose. Keep the shoulders engaged to stabilize the body. Stay for a few breaths.

From Vajrasana, separate the knees and bring the body into a forward bend, extending the arms in front. As gravity works, let the chest and forehead or chin rest on the floor and let the whole body relax into the pose. Stay for a few breaths and release the pose. 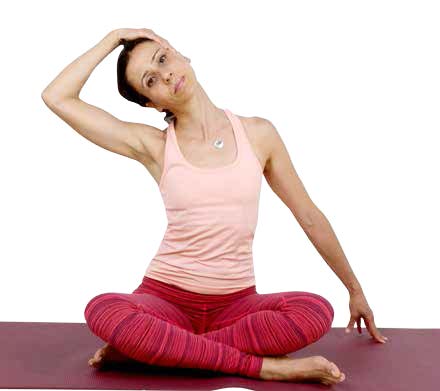 The below counter poses will relieve any tension created in the upper body ang legs. 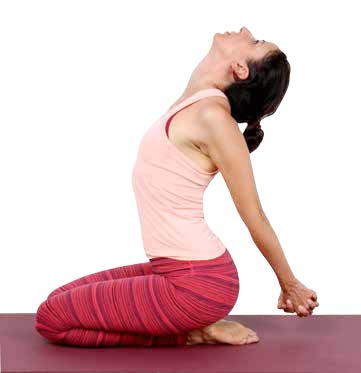 Sit in Vajrasana with the back straight. Rotate the shoulders outwards and interlock the fingers behind the hips. Inhale and on the exhale, push the shoulders away from the ears, then outstretch and straighten the arms. Push the chest out and lift the chin. Hold for a few light breaths and release the pose. Repeat two more times. 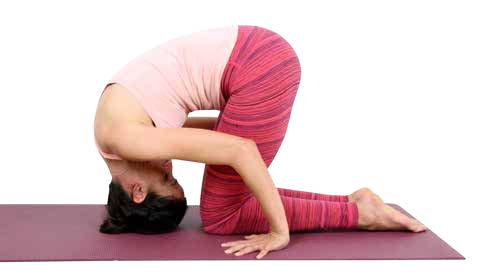 From Vajrasana, place the hands on either side, close to the knees and bring the top of the head to the floor. Inhale and on the exhale, lift the hips and let the back of the head roll forward, the chin moving closer to the chest. Stay in this pose for a few breaths. To release, slowly sit back on the heels and keep the head down for a few moments. 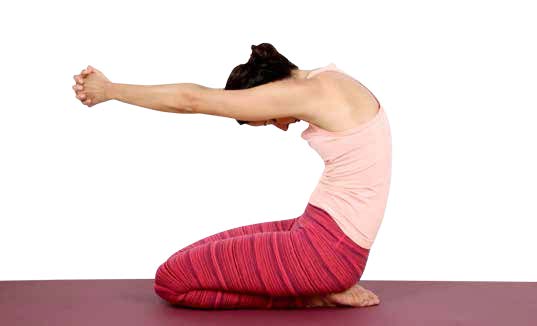 Seated back expansion and Shoulder Protraction

Sit in Vajrasana with the back straight. Interlock the fingers and keep the arms at shoulder level. Inhale and on the exhale, push the chest back into a hunch and bring the chin to the chest. Round the back and pull the abdomen in to hunch the back more. Stay for a few breaths and release the pose. Repeat two more times. 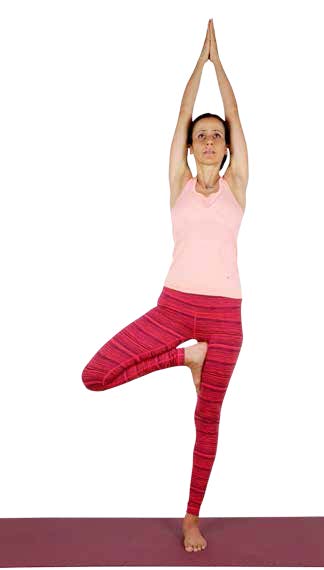 Stand with the legs together. Bend the right knee sideways and bring the right foot to the left inner thigh (option to bring the foot to the left ankle or shin). Press the foot against the thigh but avoid pressing on the left knee. Bring the hands into Anjali mudra (prayer) with the thumbs on the chest. Then, slowly raise the arms. Keep the gaze forward and breathe lightly. Hold the pose for 3 breaths; bring the leg down and repeat on the other side.

In Padma Sirsasana, the energy centre of both the sacral area and crown of the head are activated. The svadisthana chakra, when activated, increases creativity, stabilizes emotions and encourages movement. On the other hand, the sahasrara chakra heightens our spiritual connection, provides clarity on our intentions and simplifies the mind.
When we are in an inversion such as Padma Sirsasana, our mind shifts focus from one point to another – as we first focus on coming into a headstand, then putting our legs into lotus pose, then back to focusing on the balancing part so we don’t fall over. This shows how powerful our mind and body can be – that we have the ability to achieve what we set our minds to.
As always, seek the guidance of an experienced teacher and take every step of your yoga practice with a positive frame of mind.

Yogananth Andiappan is known as a pillar of yogic wisdom and techniques from well worth a lifetime of learning. The son of well-renowned Yoga Guru Dr. Asana Andiappan, a figurehead in yoga from India, Yogananth began his yogic journey at the age of 2. He is currently completing a Ph.D at the Sport University of India, studying the effects of yoga therapy and natural yogic diet on cancer patients, and is Founder and Director of Anahata Yoga in Hong Kong.