By Louise Vas, with the guidance of Yogananth Andiappan
Poses demonstrated by Edith Chan

In this month’s featured pose, we explore the opposing movements of the major muscles and joints in the body, supported by – the flexion and extension of the spine, hips and knees. In Paripurna Bogarasana, we arch while in a forward bend, and we straighten one leg while the other is bent – two differing movements complementing each other in this beautiful pose.

The below warm-up poses prepare the upper body for the final pose.

1. Come into tabletop position with the arms directly under the shoulders, knees hip-width apart and the feet in line with the knees.

2. Inhale and on exhale, lean forward and slide the hands forward to bring the chest in and chin to the floor. Let the weight of the body rest on the chest area and ensure that there is not too much pressure on the throat and jaws.

3. While maintaining light breaths, bring the hands together and interlock the fingers. Keep the elbows on the floor.

4. Inhale and on exhale, raise the forearms just above the elbows. Hold the pose for a few counts.

5. Come out of the pose by releasing the hands and slowly pushing the hips down and sliding the legs back, lying down on the abdomen.

1. Sit on the floor and stack two blocks, one flat and the other upright. Place the blocks about 6 inches away from the hips.

2. Place the hands behind the hips and lifting the chest to arch the back, slowly lower the torso and aim for the middle back to rest on the block. Make sure that the blocks are below the shoulder blades. Make small adjustments as needed.

3. When the arch is settled, raise the arms over the head and hold the opposite elbow.

4. Hold this pose for a few subtle breaths. To come out of the pose, bring one elbow on the floor by the side of the body, and slowly roll over to the same side.

The below poses prepare the lower body (mainly hips and legs) for the final pose. 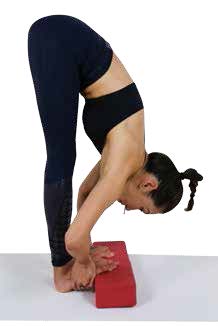 1. From a standing position, Place two blocks in front of the feet and step on the blocks, pressing the balls of the feet on the blocks and the heels on the floor. Keep the legs straight and actively roll the legs inwards.

2. Hold the waist, lengthen the torso by lifting the chest and roll the shoulders back.

3. Inhale and on exhale, bend forward from the hips, keeping the chin lifted.

4. Reach down to the blocks or the floor with the fingertips. If possible, hold the bottom of the feet. Upon holding the feet, inhale and on exhale, bend the elbows sideways to widen the torso and bring the abdomen closer to the thighs.

5. Stay in the pose for a few deep breaths. To come out of the pose, hold the waist and slightly bend the knees to come up, stepping off the blocks. 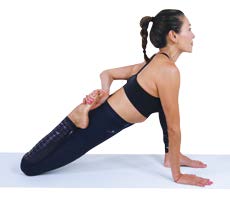 2. Bend the left knee and with the right hand, reach for the left foot from behind. Bring the right shoulder to the right thigh and keep the gaze forward, torso extended.

3. Inhale and on exhale, bring the left heel closer to the side of the left hip. Slide the left knee back to deepen the stretch to the front of the thigh.

4. Hold the pose for a few deep breaths. Slowly release the pose and repeat on the other side. 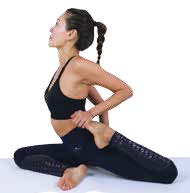 1. From the lunge position with the right leg forward and hands on the floor, move into Pigeon Pose by dropping the right knee sideways, and hips to the floor.

2. The left leg is extended back, straight from the hip. Keep the hips down and the body weight in the centre.

3. Bend the left knee; rotate the left shoulder outwards and hold the foot with the left hand. Swivel the left elbow up to make the fingers pointing forward. Keep the gaze straight, torso facing front and lifted.

4. Inhale and on exhale, bring the left heel closer to the right hip. Hold for a few breaths, release and repeat the same on the other side. 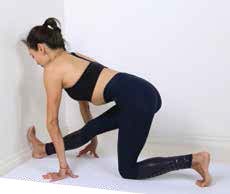 1. Sit facing the wall and extend the legs. Remember the distance of where the sitting bones are.

2. Kneel on the floor facing the wall, with the same distance as where the sitting bones were. For better balance, tuck the toes. Place the fingertips or palms on the floor.

3. Inhale and on exhale, extend the right leg, sliding the heel out and straightening the leg until the toes and ball of the foot rest on the wall. Adjust the gap of the legs as needed.

4. Keep the arms straight and lengthen the spine, slowly resting the top of the head of forehead on the wall.

5. Hold the pose for a few breaths and slowly come out of the pose by bending the front knee and pushing up. Repeat the pose on the other side. 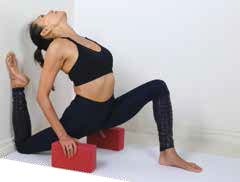 1. Kneel on the floor facing away from a wall and have two blocks by the sides of the legs.

2. Hold the blocks; bring the left leg forward with the foot flat, the ankle straight below the knee.

3. Step the right knee back and bring the knee to the floor, next to the wall. Let the right lower leg rest on the wall with the ankle extended, and allow the hips to come into a lunging position.

4. Inhale and press the hands to the blocks to lengthen the torso; exhale to arch the back. Aim to bring the top of the head touching the wall behind.

5. Hold the pose for a few light breaths. Come out of the pose by bringing the right knee forwards. Repeat the pose on the opposite side. 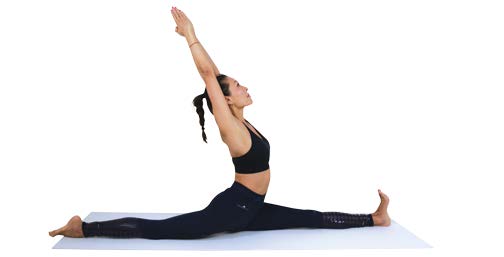 Starting from Ardha Hanumanasana with the right leg extended forwards and left knee on the floor, place the hands on the floor and keep the torso lifted. Keep the balance and slowly slide the left knee further back and let the hips sink lower. The back leg can be used to go deeper into the pose by slowly stepping the foot back until the left thigh is on the floor. As you go lower, twist the torso slightly to the right side to engage the hip flexors and keep the hips neutral. Keep the back leg extended and when balance is achieved, extend the arms over the head and slightly arch the back. 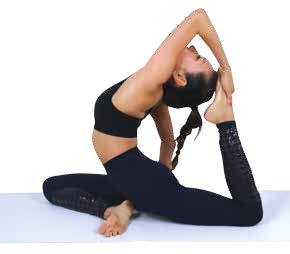 1. Kneel on the floor with the knees hip-width apart. 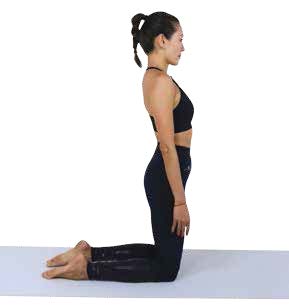 2. Extend the right leg forward, toes pointing up and place the hands on the floor. Maintain the hip to be above the left knee 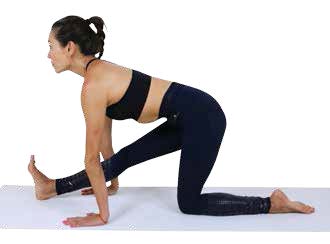 3. Slowly slide the right heel forward, keeping the body weight on the hands. 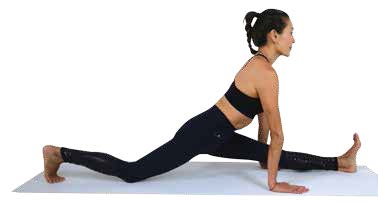 5. Turn the torso facing left. Bend the left knee and hold on to the left foot with the left hand, the elbow pointing down and away from the body. Place the right fingertips on the floor for support. 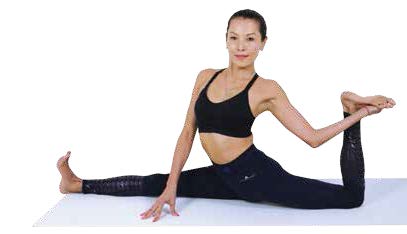 6. Bend and raise the elbow to bring the foot closer to the shoulder, rotating the shoulder so that the elbow is pointing upwards. 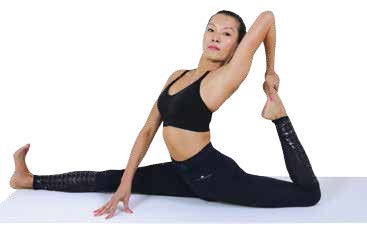 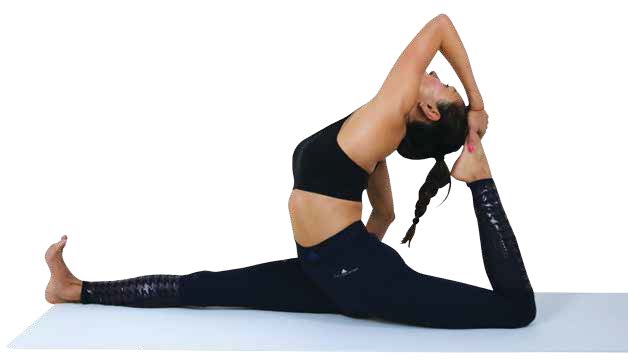 Complete the left shoulder rotation; turn the body to face front and aim to bring the foot touching the head. The right hand goes to the right side of the hip on the floor, lightly supporting the body to keep the weight centred.

There are many ways an asana can be performed or interpreted depending on each practitioner, and classic Hatha Yoga text suggests that there are over 8 Million poses.

From the final pose, below are variations to the arm position. 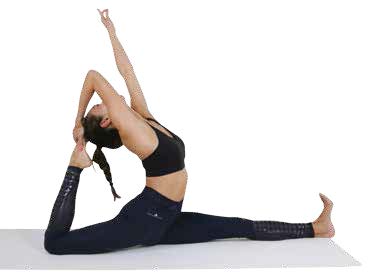 Unsupported variation
Release the right hand from the floor and extend the arm upwards. 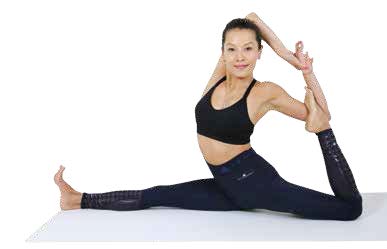 From Step 5 holding the foot, simply slide the foot to the inside bend of the left arm. The right hand holds the left in front of the chest and slowly raise the arms above the head. Depending on the shoulder’s range of mobility, the right hand can hold the left wrist.

The below modifications are available to different practitioners.
For those challenged by the backward bending movement
Coming into a backward bend while the hip is tilted forward is generally challenging because of two opposing movements. 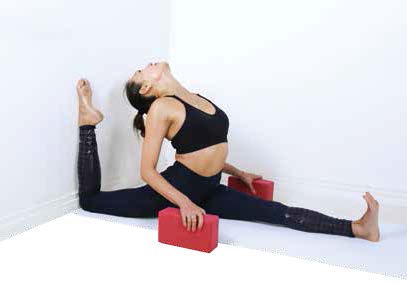 From the Eka Pada Nindra Rajakapotasana warm-up against the wall, come into the split. Press the hands on the blocks to help in lengthening the torso first before arching the back. 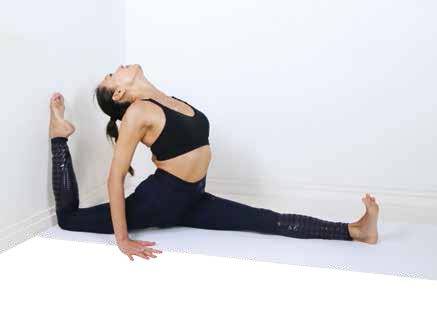 After practicing with the blocks, try to remove the blocks and place the hands on the floor. Focus on arching the back and lifting the chest. 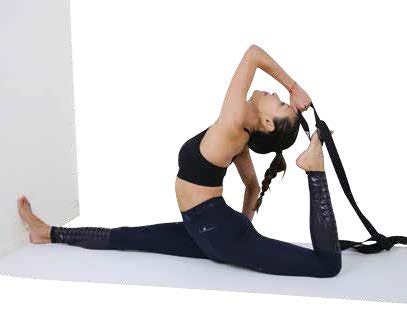 For those with limited shoulder rotation

The use of a strap extends the reach of an arm with limited shoulder rotation. To come into this pose, when the back leg is bent, wrap a strap around the foot and have a firm grip on the strap. Rotate the shoulder the same way as described in earlier steps and keep the elbow pointing up. 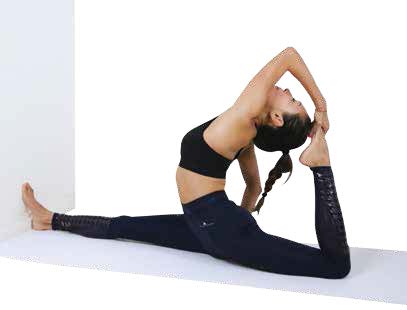 By practicing Paripurna Bogarasana with the front foot against the wall, the foot can support the body to actively keep the hips aligned, and for the to avoid being overextended.

Neutralizing poses are important for long-term injury prevention; it allows the body to return to its neutral position. Be aware of pressure alert points and listen to your body – do neutralizing movements after slowly coming out of the pose.

Lie down on the abdomen with the toes pointing and legs extending back. Bring the elbows to the floor in line with the chest. Inhale and on exhale, press the elbows to the floor and lift the chin and chest, consciously arching the upper, middle and lower back. Inhale again and on exhale, lift the left leg and point the toes. Aside from lifting the leg, focus on extending the leg and arching the back. Hold for a few counts, bring the leg down and repeat the same on the other leg.

The below counter poses will relieve any tension created in the torso, hips and legs.

From Sphinx Pose, separate the legs into hip-width and tuck the toes. Inhale and on exhale, lift both legs with the aim of bringing the feet in line or higher than the shoulders. Engage the thigh and keep the legs straight. Hold the pose for a few breaths and slowly bring the legs down.

Whenever we are faced with two choices, we do our best to see the pros and cons in each choice. As expected, we either gear towards the choice that can give us a greater deal, or the choice that is easier for us. In the practice of yoga, we are exposed to the option of staying where we currently are, or opening up to new opportunities and experiences.
In the physical practice, at times we might think that “I’m fine where I am”, and this might hinder us from exploring the inner self, the gift of yoga.
Come to yoga with an open and humble heart, as this can guide you into finding the perfect balance within.
For advanced poses like Paripurna Bogarasana, be mindful of the pose’s intensity and seek guidance from an experienced teacher.