Ayurveda and Traditional Chinese Medicine use pulse signals obtained from the radial artery as a means for diagnosis of diseases. These conventional techniques are nowadays being replaced by devices using various sensors for detecting the pulse signal from the radial artery at the wrist position. Various research articles have extensively explained the values of pulse diagnosis.

In ancient times, pulse diagnosis using the signals obtained from the three precise locations on the wrist at the radial artery, viz. vata, pitta and kapha, played an important role in Traditional Chinese Medicine and Ayurveda. The signals obtained from these locations are not only due to the contraction and relaxation of blood vessels but also a result of movement of blood through the artery and a change in their diameter. The science of Ayurveda is based on these three pulse signals, namely vata, pitta and kapha. In Traditional Chinese Medicine these pulses are named as cun, guan and chi respectively. But the basic science behind both these systems is the same. The Nadi Vidwans, using their experience and skill, feel this signal on the patient’s wrist. Any change in the nature of the signal felt is a means of diagnosis of disease. The different wave forms obtained from vata, pitta and kapha pulses have a shape similar to that of the movement of the cobra, frog and swan respectively (as shown in the diagram below). 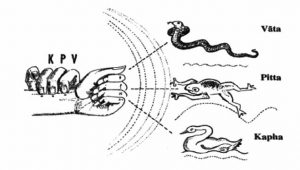 These pulses are felt at specific positions on the wrist of the patient: vata on the index finger, pitta on the middle finger and kapha on the ring finger. The Nadi Vidwans feel them by placing their hand in a specific orientation on the patient’s wrist, as shown below: 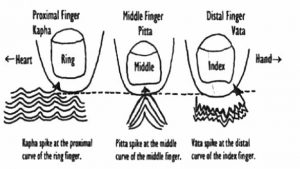 Also, it is said that the analysis of hollow organs and semi-solid organs is done by feeling the nature of the pulse at the deep and superficial layers of the wrist radial artery by applying proper external pressure. The location of organ pulses on both the hands is shown here: 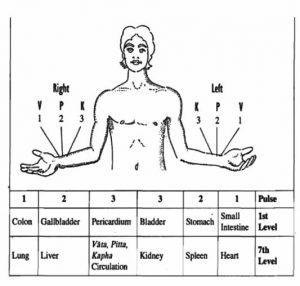 But this technique of arterial pulse analysis requires years of experience and knowledge and can vary from person to person. Thus the recent trend follows to replicate this system in terms of a device which will be smart enough to diagnose diseases by capturing the signals from the wrist using various types of sensors, depending on the disease being diagnosed.

The more important kinds of pulse are as follows.

(1) The quick or slow pulses, referred to the quickness of arterial expansion during a single beat. Thus the pulsus celer corresponds to our collapsing pulse, and the pulsus tardus to our sustained pulse of aortic stenosis. Between these two extremes is a pulse of intermediate kind called moderate.

(2) As the artery is extended in all directions, so it has length, breadth and depth. A pulse that is at the same time long, deep and broad is a large pulse, and one that is short, shallow and narrow a small pulse. In the case of each dimension, between the two extremes is a pulse of moderate grade, so that there are 27 main varieties of pulse according to dimensions.

(4) The arterial wall may be hard or soft.

(6) Frequent or infrequent pulses. This is judged by the duration of the interval between the beats; for of course Galen had no pulse watch.

(7) The rhythm or cadence of the pulse, related to the duration of systole and diastole, following the ideas of Herophilus. Thus the pause might be two to four times as long as the expansion.

(8) The equality (evenness) or inequality. It is extremely difficult to follow all the subtle distinctions in this respect, but the ancient scholars recognized an inequality of movement in a single beat or in successive beats. The pulsus myurus consisted of a series of beats of diminishing intensity, likened to the tail of a rat; if the pulse faded completely, it was called a failing myurus, if it gradually reappeared, a recurrent myurus. This description suggests sinus arrhythmia, but against such a view is the grave prognosis accorded it by ancient scholars.

Of the various pulses exhibiting inequality of the individual beat, we may mention the dicrotic, consisting of a double beat, and the pulsus caprizans, named by Herophilus, which resembled the leap of a goat or of a gazelle (pulsus gazellans of Avicenna). As the gazelle is said to leap up, pause in the air, and then to take a swifter and mightier spring, so the expanding artery pauses, then makes a swifter and larger movement.

Vata, pitta and kapha move in the blood through the rasa and rakta dhatus and it is an interesting fact that the doshas are best felt under specific fingers. We feel the qualities of vata best under the index finger, because the nerve receptors in that finger best perceive those qualities embraced by vata—light, subtle, mobile, dry, rough. The same is true for feeling pitta and kapha under the middle and ring fingers, owing to their respective qualities. Vata is always the distal finger (the finger farthest from the heart) wherever the pulse is palpated, whether it is the wrist, ankle, groin or elsewhere. 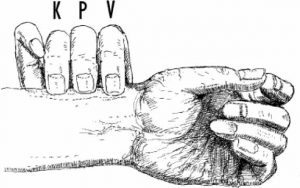 When a happy and cheerful cobra is felt under the index finger, a mellow and easy-going frog is felt under the middle finger, and a peacefully swimming swan is under the ring finger, that person is a happy and healthy human being. However, in cases of imbalance, a different animal may be felt under each finger. For instance, a frog may be felt under the index finger, where one should feel a cobra. We can say that the frog is chasing the cobra, which means pitta is blocking vata. Perhaps under the middle finger one feels a cobra instead of a frog. In that situation, visualize the cobra chasing the frog, which means vata is pushing pitta. These are only two observations of many that can be made.

Even though the gross manifestations of the three doshas are perceived generally under the index, middle and ring fingers, their subtle qualities are felt under specific areas of each fingertip: at the distal, middle and proximal curvatures.

The most subtle dosha is vata, which is light, mobile, subtle and expansive. With very little pressure, the blood flow can be blocked. Even if vata is partially blocked by the finger, its subtlety will not create a spike at the proximal curvature of each palpating finger. It will easily go through to find space to expand and create a spike at the distal curvature of the fingers, as shown in the picture.

Like vata, pitta is also light, but it is liquid, oily and substantial in nature, whereas vata is dry and empty. Because of its light and liquid qualities, a pitta spike will be felt at the middle curvature of each of the three fingers.

Kapha is heavy, oily, static and slow, so it stops at the site on the finger closest to the heart and creates a spike at the proximal curvature of each finger.

In summary, vata is faster and moves ahead to the distal curvature, pitta is next and moves to a central position next to vata, while kapha is slow and stops at the proximal curvature. The curvature of the finger is a sensitive instrument, placed directly on the pulse to feel the throb. The art of pulse reading is very subtle and Ayurveda teaches us to be aware of the nature of the body, mind and consciousness of the individual and of the quality of the spikes felt separately under each finger. 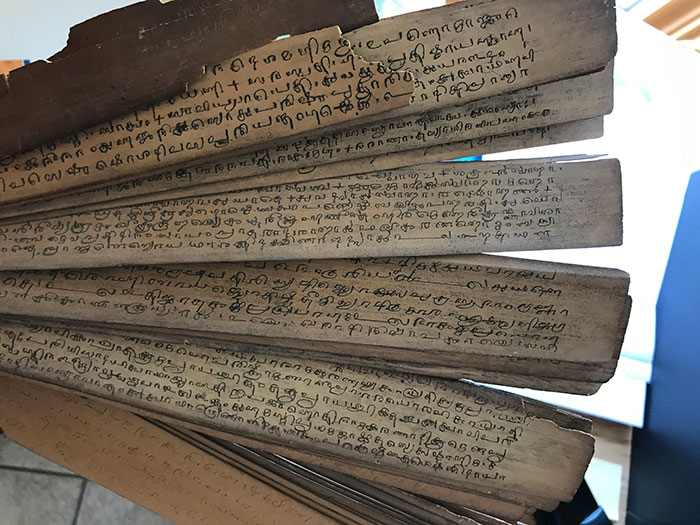 It is convenient to divide the reading of the radial pulse into seven levels. According to the Ayurvedic system of medicine, there are seven dhatus. If we take a crosssection of any extremity, from the superficial layer to the inner core, the seven dhatus are present. For instance, the superficial layer is rasa, the capillary layer is rakta, and so forth. Likewise, in the pulse, the superficial level can be called the first level, and if we go to the deepest level, after which the pulse is obliterated, we feel the seventh level. In between the superficial and deep pulse there are another five levels, to make seven in total. As we press down on the radial artery, we can feel the spikes of the pulse change as we move deeper or shallower from one level to another.

Vata, pitta and kapha move in the blood through the rasa and rakta dhatus and it is an interesting fact that the doshas are best felt under specific fingers.

Also, according to the concept of Ayurveda each organ is related with the pulse signals obtained in the superficial and deep layer of artery on both the hands as shown earlier. Thus to analyze a disease related to a specific organ, only one or two pulses can be analyzed instead of analyzing all the three pulses: vata, pitta and kapha.