By Louise Vas, with the guidance of Yogananth Andiappan
Poses demonstrated by Shilpa Patil

In this month’s featured pose, we move into a deeper practice of Natarajasana or Dancer’s Pose. 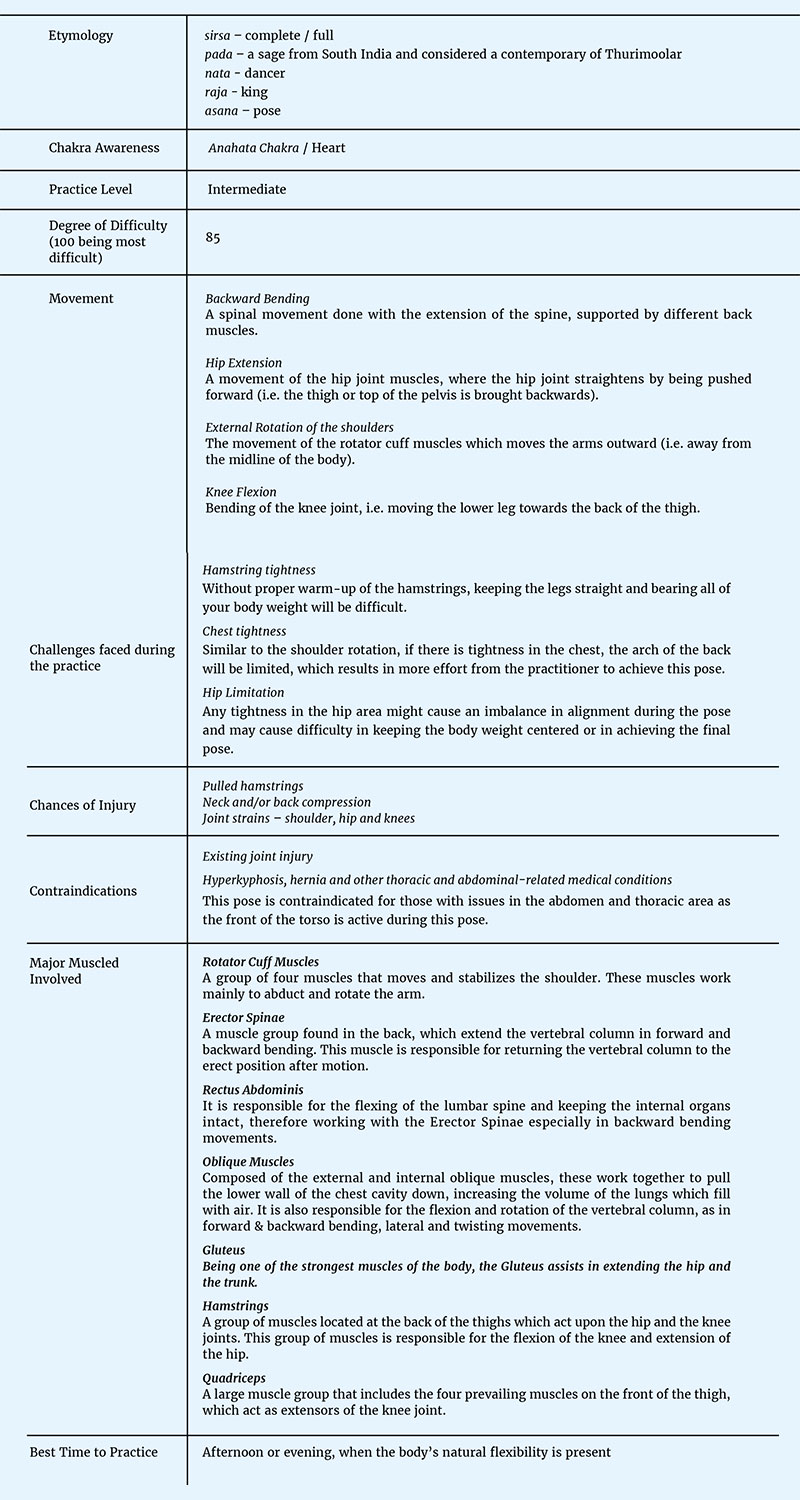 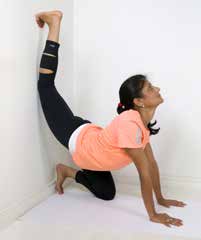 1. Kneel on the floor with the soles of the feet pressing against the wall.
2. Bring the hands on the floor and slightly shift the weight to the hands.
3. Slide one leg up to the wall and aim to straighten the leg. Keep the toes curled under to activate the calf muscles.
4. Inhale and on the exhale, press the hands on the floor and arch the back while keeping the shoulders relaxed. Keep the gaze upwards.
5. Hold the pose for a few breaths and release, repeating the pose on the other leg. 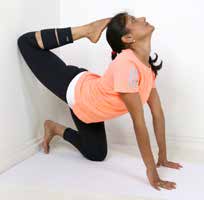 1. From Vyagrasana, lift the wrists and the fingers to the floor.
2. Deepen the backward bend, look upwards and bend the knee.
3. Extend the ankle and aim to touch the toes to the top of the head.
4. Hold for a few lights breaths; release and repeat on the other leg.

1. Come into tabletop position with the arms directly under the shoulders, knees hip-width apart and the feet in line with the knees.
2. Inhale and on the exhale, lean forward and slide the hands forward to bring the chest in and the chin to the floor. Let the weight of the body rest on the chest area and ensure that there is not too much pressure on the neck and jaw.
3. While maintaining light breaths, bring the hands together Jumping Castle and interlock the fingers. Keep the elbows on the floor.
4. Inhale and on the exhale, raise the forearms just above the elbows. Hold the pose for a few counts.
5. Come out of the pose by releasing the hands and sliding the legs back, lying down on the abdomen.

1. Sit on the floor and stack two blocks, one flat and the other upright behind you place the blocks about 6 inches away from the hips.
2. Place the hands behind the hips and lifting the chest to arch the back, slowly lower the torso and aim for the middle back to rest on the blocks. Make sure that the blocks are below the shoulder blades. Make small adjustments as needed.
3. When the arch is settled, raise the arms over the head and hold both elbows. Keep the legs straight and flex the ankles to extend the calf muscles.
4. Hold the pose for a few breaths. To come out of the pose, bring one elbow on the floor by the side of the body, and slowly roll over on to the same side. 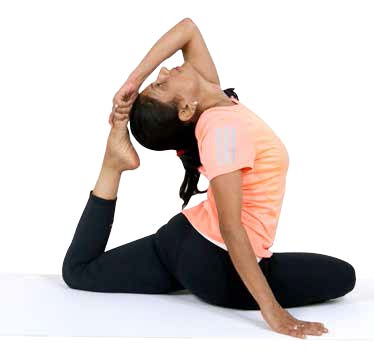 Start from Pigeon Pose with the right leg in front and the left leg extended back. The hands are on the floor next to the hips. Turn to the left, bend the left knee, and hold the left foot or ankle with the left hand, the elbow pointing sideways and away from the body.
Slowly bring the left elbow up, rotating the shoulder so that the elbow is pointing upwards. Exhale and arch the back more and try to bring the left foot to the top of the head. Keep the hips parallel. 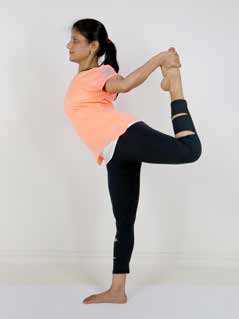 1. From a standing position, bend the left knee and reach for the foot with the left hand. Keep a good grip on the foot while maintaining the right leg straight and grounded.

2. Rotate the left shoulder and bring the left elbow pointing sideways, bringing the foot closer to the body. 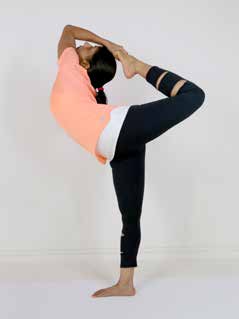 3. Slowly bring the left elbow up, completing the shoulder rotation. Deepen the arch in the back and raise the chin, bringing the bottom of the foot to the top of the head. 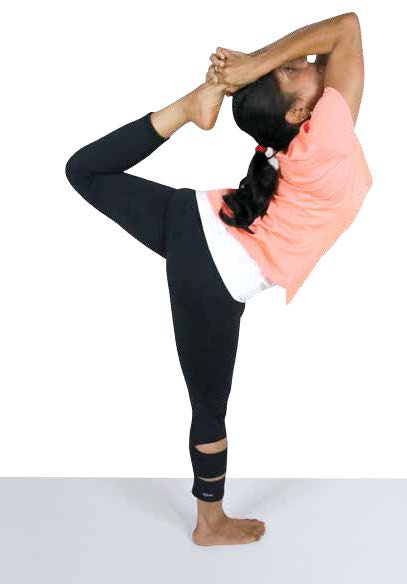 Keep the body weight centered. Extend the right arm, rotate the right shoulder similarly and reach for the left foot. Keep the body facing front and the chest open.

There are many ways an asana can be performed or interpreted depending on each practitioner. Classic Hatha Yoga text suggests that there are over 8 Million poses.
Below is a variation of Sirsapada Natarajasana. 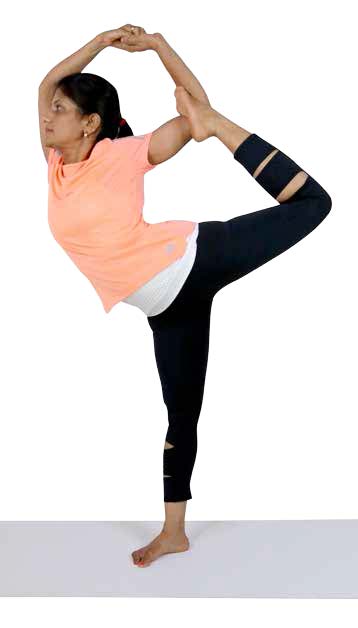 From holding the foot in Step 1, simply slide the foot to the inside bend of the left arm. The right hand holds the left in front of the chest. Slowly raise the arms above the head. Depending on the shoulder’s range of movement, the right hand can hold the left wrist.

The below modifications are available to different practitioners 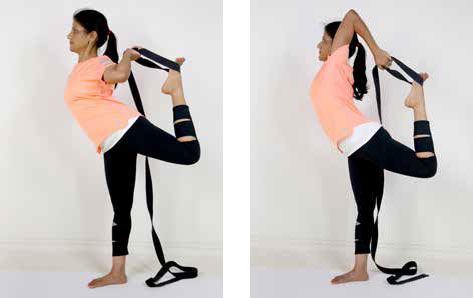 For those with limited external shoulder rotation

Using a yoga strap is helpful in ensuring that the body is not overstretched – it extends the distance between the leg and the torso and requires less shoulder rotation. Wrap a strap around the foot and hold on to the strap, and come into the pose. In this practice, focus on the shoulder movement more than trying to touch the foot to the head. 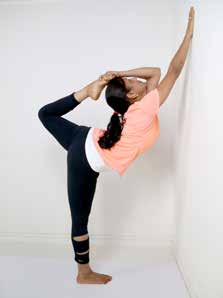 For those challenged by balance

Stand an arm’s length away facing a wall and place one hand on the wall. Come into the pose as described previously. While deepening the backward bend, slide the hand up the wall. Keep your awareness on the whole body.

Neutralizing poses are important for long-term injury prevention; they allow the body to return to its neutral position. Be aware of pressure alert points and listen to your body – do neutralizing movements after slowly coming out of the pose.

Come down to the floor on the hands and knees. Separate the knees and bring the feet together. Bring the left hand to the right side, directly under the shoulder and in line with the right knee. Extend the right arm upwards and then back, straight from the shoulder joint. Keep the chest lifted and extended. Hold the pose for a few light breaths. To twist on the opposite side, bring the right hand to the Stand with the feet hip width apart. Extend the arms forward, interlock the fingers and keep the arms at shoulder level. Inhale and on the exhale, pull the chest inward into a hunch, rounding the upper and middle back. Bring the chin down and push the hips forward, maintaining the legs straight. Stay for a few breaths and then release the pose. Repeat two more times.e left, in line with the left knee and repeat the twist. 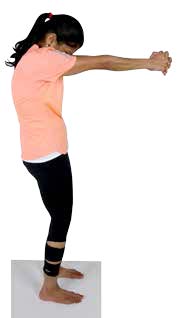 Stand with the feet hip width apart. Extend the arms forward, interlock the fingers and keep the arms at shoulder level. Inhale and on the exhale, pull the chest inward into a hunch, rounding the upper and middle back. Bring the chin down and push the hips forward, maintaining the legs straight. Stay for a few breaths and then release the pose. Repeat two more times.

The below counter poses will relieve any tension created in the torso, hips and legs.

Sit with the knees bent and place the hands behind you, about a foot away from the hips. The fingers are pointing forwards. Inhale and on the exhale, pull the chest in and bend the elbows to round the back, aiming to bring the lower back to the floor. Hold the stretch for a few breaths, then come up slowly. Come in and out of the pose a few times, trying to lower the back closer to the floor more after each time.

Come onto your hands and knees with the back flat, hands directly below Bouncy Castle the shoulders and knees directly under the hips. Palms are flat and fingers are pointing forwards (neutral position). Inhale and on the exhale, round the back and push the chest in, creating a nice hunch (cat pose) to expand the upper back. Hold the pose for a few breaths.

Inhale and come back to a neutral position and on the exhale, bring the chin up and gradually arch the back (cow pose). One cycle of movement and breathing is as follows:

A usual question of non-yoga practitioners to yoga students and/or teachers is – “can your foot touch your head?” or “Can you bring your leg behind the head?”
There are many ways to do this and whichever way it is, there always comes the “ooohs” and the “aaahs” after, especially when an asana is done with grace and stability. Natarajasana in itself is one of the most beautiful and probably most photographed poses in modern-day yoga as it evokes elegance and strength. To add in the “sirsa pada” part brings the pose and the practice to the next level – this is achieved not only because our body allows it, but because our mind and heart allow it too.
In backward bending poses like this, we open the heart to all types of energy – be watchful of how energy is taken in and how this is processed and used. We all want positive vibes but in reality, we also get negative feelings. When this happens, look into the purity of your heart – do not falter and go back to your own truth.
As always in asana practice, consult an experienced teacher when trying intermediate poses.