When I walked up to the Yoga Deck it had already begun to rain. It was just a drizzle, a gentle mist that anywhere else in the world might not have been so ominous. Despite its stature and sturdiness, our beachfront Yoga deck was not invincible to the bombardment of rain so often experienced during September in Costa Rica. It was the ‘Green Season’ and in the blink of an eye clear skies could tenda gonfiabile become torrential downpours.

I set up for yoga class, arranging mats and props in anticipation of the guests. Around 3:45 the guests began to trick in, each one explaining to me their stories with yoga. The more guests that walked through the door, the more I knew the class would be challenging.

The first to walk through the door was a complete beginner. The next was a beginner who had taken a few classes 30 years ago. Then followed a deaf woman with no yoga experience, a young girl who had been a gymnast, a man coming to his first yoga class after a hip replacement, a woman who had injuries on every joint system in the body, a woman who could easily sustain a properly aligned handstand for over 30 seconds, a man who proclaimed he was too stiff from surfing to ever actually do yoga, and myself…their teacher.

When I sat down on the mat and had everybody find their comfortable seated position for opening meditation the rain began to come down a bit harder, a bit of mist hitting the back of my neck. I figured it was a great opportunity to draw our awareness to listening, to the sense of sound, and the wonderful natural symphony of rain beneath the jungle canopy. Thunder crackled over the ocean behind me, a flash of lightening illuminating the clouds for just a moment.

“Tune into the sound of the jungle!”

Mist from the rain began to saturate the edges of the yoga deck as we moved through out warm up. Just as we completed a few rounds of cat-cow and were moving towards downward facing dog there was another flash of lightening. Bam! The thunder rumbled with such force that the Yoga deck shook. Then it began to pour. 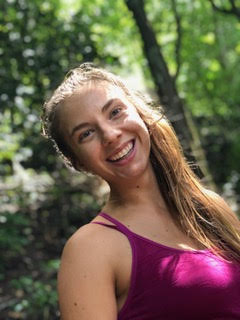 I had become a drill-sergeant yoga teacher.

I had to change my approach; I knew I couldn’t keep up such yelling for 75 minutes! The pace of the sequencing was slow, giving me enough time address each student before moving on. Up close my words were concise, insistent, and very…very loud.

As I gave alignment points and adjustments to the students I felt certain that it was a failure of a class. One of those teacher moments where you just throw in the towel and accept the impending criticism. I could visualize their comments after class, complaints about being unable to hear, and criticism about me yelling at them. Surely it was not the peaceful class everybody had anticipated.

In my moment of defeat I realized how much as a teacher I rely upon my voice. I very intentionally select words, and pride myself on excellent verbal instruction.In this class though, the most developed and refined aspect of my teaching had been taken away from me. I was caught in the insecurity of losing your best asset, and was forced to turn towards the aspects of teaching that I do not veer towards as naturally.

When I stopped obsessing about how bad the class was going, I was better able to teach in accordance with my definition of good teaching; attentiveness, individualization, connection, and compassion. I stopped wanting the rain to stop, and almost did not realize it’s intensity around me because I was completely with my students.

I was providing individualized attention, teaching to the individual in every posture. I was present with every person in the room, enhancing their understanding of how to deepen their practice. In so doing the hour passed by quickly, and when the students had all arrived in Savasana the rain lightened up enough for me to be heard.

My throat was raw, and my energy was depleted. Exercises that use the breath tap into the life-force energy contained in our various bodies. I had been using a huge amount of pranic energy to get through the class, I had exerted so much udanavayu energy that vissudha chakra was buzzing.

I had thought that I had been teaching without being heard. That even the most my voice could give was not enough. With a choke of emotion my awareness came back to my throat. Perhaps it was a lesson to me, a challenge from the universe suggesting that I needed to be more aware of other aspects of my teaching. That my voice, while powerful, is not the only powerful aspect of my teaching. Perhaps this was the time to bring my voice to stillness.

As teachers we so often want to be heard. We want to express and discuss all of the amazing aspects of yoga and how it can change lives! The reality is though, that pushing your voice upon other people does not necessarily make you a good teacher. Yes, to teach you need to be heard, however it is not just your voice that people listen to. There is something to be heard in the energy in every intention. This class taught me that unspoken energy, attention, and intention all speaklouder than any words ever could.

After our final Om and Namaste I smiled at all of the students, and saw a surprising sparkle in many of their eyes. “Thank you so much for class today. I’m sorry about the rain, I’ve never yelled so much in a yoga class!” There were a few laughs, and then everybody began to clap. One by one the students came up to me, giving me hugs, shaking my hand, telling me that it was an amazing experience, one that they would never forget. I was certain that I would never forget it either.