The impact of words on our yoga practice.

Words have a magical power. They can bring either the greatest happiness or deepest despair; they can transfer knowledge from teacher to student; words enable the orator to sway his audience and dictate its decisions. Words are capable of arousing the strongest emotions and prompting all men’s actions.” (Sigmund Freud 1856-1939)

The power of words goes far back in recorded history with prayers, mantras, spells, and curses. Words can be subtle yet effective and can produce more results than physical power. Even though once they are spoken they are gone, words can leave a trace in people’s minds forever having either a positive or negative lifelong impact, depending on what they are and how they are used.

Copious amounts of research studies have shown that exposure to parental verbal abuse is associated with higher rates of psychopathology (Tomoda et al 2011). A study by Teicher et al (2010) found that experiencing peer verbal abuse can cause far more than emotional harm, it can result in meaningful alterations in the brains structure.

When I started yoga back in 2010 my yoga teacher could tell by the looks on our faces whether we were talking positively or negatively to ourselves whilst in a particular posture. He asked us to be mindful of what words we were saying to ourselves and how we were saying them. He also advised us to err on the side of caution when using particular words as these could condition us to have an aversion to the asana rather than learning why we were struggling with it in the first place.

Interestingly different words are processed in different areas of our brain. For example, everyday language is processed in Broca’s area (motor speech area) which aids the movements required to produce speech, and Wernicke’s area, which handles the recognition of and processing of spoken words, thus assists in understanding speech.

However emotional language such as swear words is processed by more primal regions of the brain such as the limbic system which is associated with emotion, memory, and behavior, as well as the basal ganglia which oversee impulse control.

When neuroscientists used neuroimaging techniques e.g. PET (positron emission tomography) scans, they found that the amygdala (part of the limbic system) is highly active when exposed to aggressive words (Isenberg, 1999) and can produce panic attacks and aggressive behaviors (Zald, 2003).

This may be because the amygdala makes several connections to memory and association centres in the brain, which could also be responsible for the increased memory skills which may be triggered when subjects are presented with swear words (Davis, 2001) e.g. conditioning in childhood, swear words are normally used in a hostile situation, also remembering the negative consequences of using swear words such as punishment.

Negative self-talk has long been a factor for and associated with a range of psychological disorders such as: mood disorder (Gilbert and Irons 2005), social anxiety (Cox et al., 2000), self-harm (Babiker and Arnold, 1997), anger and aggression (Tangney and Dearing, 2002) and post-traumatic stress disorder (Lee, 2005).

In the first yoga class I attended he told me I would be practising handstands and headstands, I replied in a panic saying “I think I’m in the wrong class!” he replied “You’re not. Go over to the wall and practise”. I was so scared of falling and hurting myself, however, I kept telling myself to “keep trying”. By the end of the class, I was able to hold a headstand against the wall. It was then I realized that handstands and headstands were not beyond my reach.

Numerous studies in sports psychology have looked at the effects of positive and negative self-talk on athletes’ performance in various sports (e.g. darts, swimming, tennis). 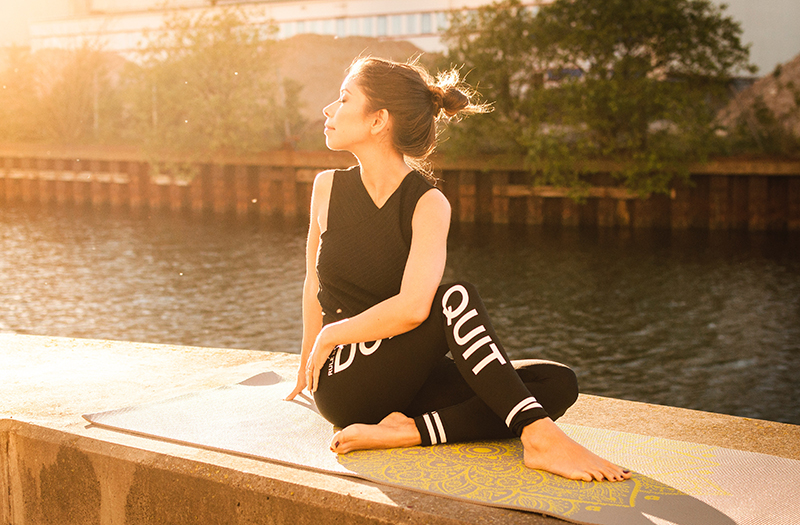 And this is something we as yoga practitioners can use to benefit our practice. We can use the power of positive words of encouragement to our advantage when we are having difficulty rather than beating ourselves up with negative self-statements. I found that the more I counteracted the negative self-talk during my practice the greater I improved, e.g. asanas started to become easier and require less effort, I stopped comparing my practice to others, I stopped focussing on the tension and learned to breathe through it and relax into it rather than running away from it. I also found that I was better able to meditate. All of which has had a positive impact on my life off the mat as well.

And this according to B.K.S Iyengar (2005) is where the magic happens when “disturbances of the mind and emotions fade away, and we are able to see true reality” (Iyengar, 2005 p. 215). By learning to let go of all the negative self-talk and memories associated with these self-defeating statements that may be holding us back, we can transcend our ego and get to a higher state of consciousness where we will see the true reality, that anything is possible.

Professional Biography: Sarah Smyth is a qualified psychologist and cognitive behavioural psychotherapist. She has over ten years’ experience of working in mental health and addiction services around the world. Sarah has is interested in pursuing research in the area of spirituality and recovery. Sarah interests include travelling, yoga, photography, and truth-seeking.

For finding all the references used in this article please visit www.asanajournal. com