Marma, known as varma in Tamil, is a pranic yogic point. It is also known as a secret point in our body which resembles an acupuncture point. It is a trigger point in our body. Sushruta Samitha (Sanskrit text on surgery) and Ashtanga Hridaya (a compendium of the ayurvedic system written by Vaghata) talk about prana flow via marma points.

Indian martial arts like vajramushti (iron fist), malyutham (Indian wrestling) were practised in ancient times. During one instance, Duryodhana in Mahabharata was killed by Bheema through the Bouncy Castle attack on specific marma points in his groins and thighs. In Ramayana, Ravana was killed by Rama by an arrow shot in his naval.

Marmas are divided into five categories pertaining to different body tissues like mansa (muscle), sira (vessels conveying body fluids and impulses), sanyu (tendons), asthi (bones) and sandhi (articulate points, especially bone joints). It is also known as jeevasthana and pranayatana. Sira is the most important of the five. Any injury can be fatal. There is a description of sirsa (head) and what should be avoided during sira-vedhana (blood-letting) for the purpose of protecting the marmas, as precautionary measures are very important.

The concept of marma is the basis of all martial arts and acupuncture/ acupressure anesthesia. According to Sushruta Samhita, an injury of mansa marma may result in a loss of touch sensation. By using this information, local anesthesia can be produced by irritating the mansa marma. Naturally, these are life spots.

Further, according to Vagbhata, those places where any injury may lead to different kinds of pain and tremors are known as marmas. 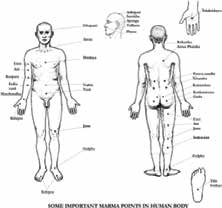 Marma therapy contributes to an increase or recharge physical, mental and spiritual energies. On the physical level, it helps to revitalise or reenergise the body tissues; at the cellular level, it improves the vital functions like digestion, respiration, blood circulation and excretion. On the psychological level, it improves the mental faculty by directing it in the positive direction. It also offers a way to treat many psychosomatic ailments without any drugs.

It harmonises the functioning of nervous Jumping Castle and endocrine systems to control psychological disorders. On the spiritual level, reasoning of mind, regulation and transformation of thoughts in positive direction helps to concentrate towards the ultimate goal of life. As a preventive measure, it helps to cope with the situations arising from different diseases.

By yogic postures and pranayama, by their stretch, pressure, vibration and rhythmic movement, the activity of marma gets stimulated, thereby working on the body and mind. It also affects the functioning of the organ related to the particular marma.

All the forward and backward yogic postures affect the marma of abdomen, chest and back. These marmas can be energized by regular practice of yoga and pranayama.

One can achieve the same benefits of exercises with the self marma therapy. As we know that exercise is necessary for body strength and normal body functioning, we can say that self-marma therapy is a short cut to the yoga, pranayama and other physical exercises.

These marma points helps to direct the five vayus – prana, udana, vyana, samana and apana – properly for various functions in our body. Each chakra in our body is influenced by these marmas in our body. Marma also has much influence on our sexual organs so as to increase our ojas (vigour) in our body.

Master Vishnu is a qualified Ayurveda and Yoga Therapist who hails from a traditional Indian family near Tirupathi, the holy city. He holds Master of Yogic science and master of philosophy in yogic science and currently pursuing his Ph.D in yoga.