1. When and how was yoga introduced to you?

My mother took me to my first Yoga class in 1997. I was 22 years old. She had been going to classes for some years, and we had been talking about meditation and sharing books for a few years prior to that. I had just returned from my first trip overseas and had been exploring meditation by myself. My first teacher was Jumping Castle teaching a mix of Iyengar and Ashtanga and vinyasa flow – although I didn’t know what it was at the time. I remember very well the feeling of deep peace, and the sensation that I was floating after class – I was hooked from the very first day.

2. Could you describe your learning with Sri K. Pattabhi Jois in Mysore? Among all the precious moments and experiences, which one is the most inspiring to you? 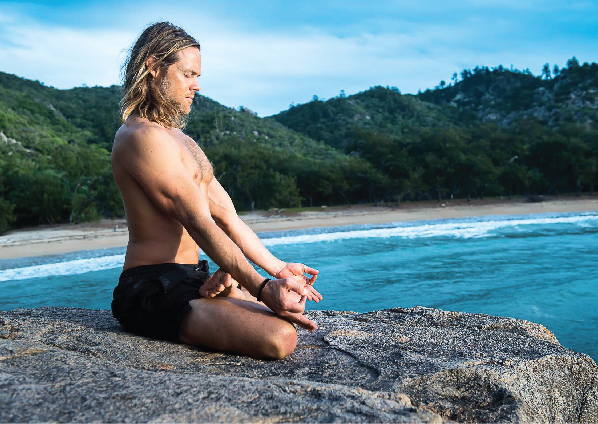 I made my first trip in 1999, after travelling all over India by bus and train, I made my way to Mysore. Back then the procedure was that you wrote a letter to ask permission to study with Guruji; although you never received a reply confirming your acceptance. Those days were special, although we didn’t realize it at the time. I remember the first day I went to practice and I looked inside the small room (a maximum of 12 students at any one time) and heard the sound of deep breathing, and saw these sweating, yogic bodies moving in a flow from posture to posture. I thought to myself, “this is what the ancient yogis must have been practicing in the forests and caves”, and I wanted to be like that. One of the most inspiring memories I have of Guruji is this one time when I was watching him teach a local Indian film star, and Guruji was about 90 years old, and the student was not understanding the verbal instructions for Surya Namaskara, so Guruji jumped to Chaturanga Dandasana and demonstrated it for him – he was so full on energy and passion until his last days.

3. Are you still constantly returning to Mysore for practice?

Yes, I’ve been going every year, or every 18 months since my first trip. I stay for a minimum of one month and sometimes up to three or four.

4. What is there to keep you in the Ashtanga yoga practice instead of other styles? And how did your practice evolve? 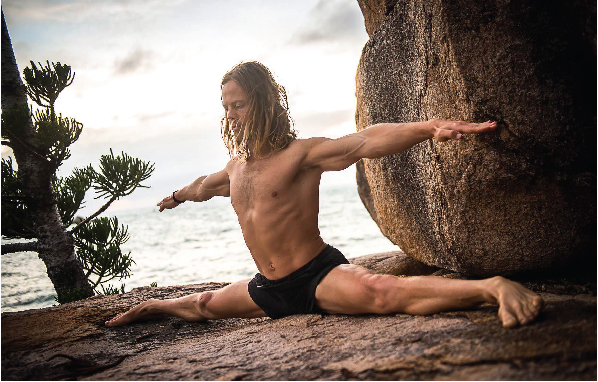 For the first few years I was still going to Iyengar classes, and I was a student of Simon Borg-Olivier for many years, and another mentor of mine was Clive Sheridan. Occasionally I would take workshops with teachers like Shandor Remete and Donna Farhi. I’ve always managed to find the common thread amongst the different teachings and apply them to my Ashtanga practice. Despite being open to different traditions and teachers, I have stuck with the Ashtanga practice because I feel that after having developed a self-practice it’s very difficult to go to yoga classes where the teacher is guiding you, because their instructions are pulling your attention outwards. There’s something special about the Mysore class; that silent group energy, which has kept me coming back for more. That said, most of the time I practice alone and I will go and practice with Sharath in Mysore once a year to keep my inspiration going. The other thing about the Ashtanga method is that it is very systematic and that approach has suited me. There are six different series and it was great to see them all laid out, and to know that to get there I could follow this system step by step. The series are very challenging, as most people know, so there has been more than a lifetime of things to keep me interested. Then there’s the challenge of incorporating a pranayama and sitting meditation practice into the asana practice. So, in a way, it feels comforting to have Bouncy Castle For Sale the same practice to keep returning back to, something that is simple and uncomplicated, so that all those different limbs of Ashtanga can be integrated into daily life. Nowadays, for my physical movement practice I also like to get inspiration from different movement specialists, such as hand- balancers and gymnasts, and I apply their knowledge to my practice.

The term Yoga is so vast – it has so many meanings. It is a way of life. It means finding balance and equanimity through the ups and downs of everyday living. It means being skillful in action – knowing what is the right thing to do in different situations. It means union; to unite with others, to unite with the oneness of life – ultimately, from the point of view of the mystics, it means the union of the individual Self with the Universal Self. It means to still the fluctuations of the mind and it is the process of achieving that, which relates back to Yoga as being a way of life – following the Yamas and Niyamas. Yoga means to harness one’s full potential and to follow one’s true calling in life.

6. What is the purpose of advanced yoga postures?
Pattabhi Jois used to say, “Primary Series is yoga therapy, Intermediate Series is for the purification of the subtle nervous system (nadis) and the Advanced series is for demonstration only”. However he also knew very well the connection between the body and the mind. He would say, “body not stiff, mind stiff’. The Ashtanga method is based heavily on the teachings of the Hatha Yoga Pradipika. Essentially this system takes the idea of asana as being a tool for overcoming disease and sickness and building a ‘diamond’ body that is free from impurities – again this relates to the body-mind connection; as the impurities are mental/emotional; greed, anger, sloth, jealousy, lust. By building a strong body through asana and pranayama, the mind also becomes strong. It is believed that the body becomes purified and the heart/mind is free from these negative qualities. Every asana has its benefits and effects on the nadis, and the advanced postures do this as well. That being said, without effectively practicing the Yamas and Niyamas then it doesn’t matter how advanced the posture is, it will not lead to freedom. I like to think of advanced postures in the same way that a mountaineer thinks of a mountain, when asked “why climb the mountain?” the answer is, “because it’s there’. If you have the inclination and the capacity to explore the advanced postures then go for it, if not then that’s totally fine.

7. How do you see the differences of yoga culture in the East and West? 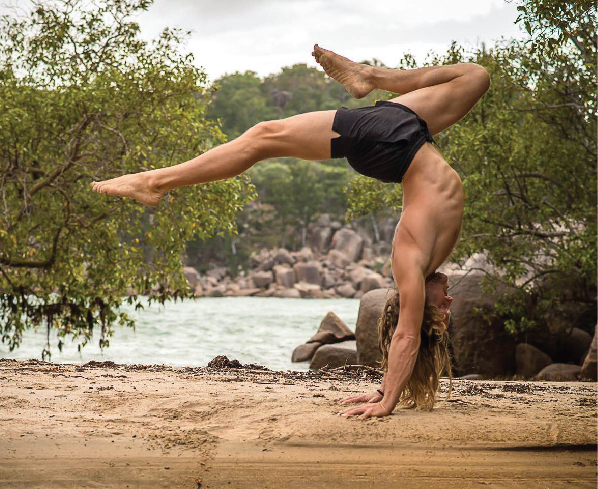 It was the western students that brought an intensity and vigor to Ashtanga Yoga as taught by Pattabhi Jois. That is changing nowadays as there are more and more Indian students who want to practice more dynamically, but previously, and even to this day, if you go to see the local Indians practicing in the shala in Mysore, the approach is far more laid back and less competitive than with the westerners. That being said though, it is in India that Yoga Competitions originated, but this has never been a part of the Ashtanga method. When I first started going to India the general perception was that asana practice was good for your health but the majority of Indian people didn’t connect it with a spiritual practice, because for them spirituality was part and parcel of everyday religious life. My interpretation, based on my own experience, is that for many westerners who have rejected Christianity, there is a spiritual void that needs to be filled, and the yoga practice does that. Of course there are many westerners who only practice Yoga for health and fitness reasons as well.

In other eastern countries, like China, Japan, and Korea, where the yoga movement is relatively new, there is a lot going on that reflects the changing complexities of our times. Their growing economies and consumer culture, have been mixed with social media trends and advertising campaigns to make yoga a massive business. At the same time the emptiness felt by many people in this consumer culture has made yoga a panacea for the maladies of modern living. This is more or less the same as what has already happened in the west.

8. Do you suggest that students shall also learn about the yoga philosophy on top of asana practice? 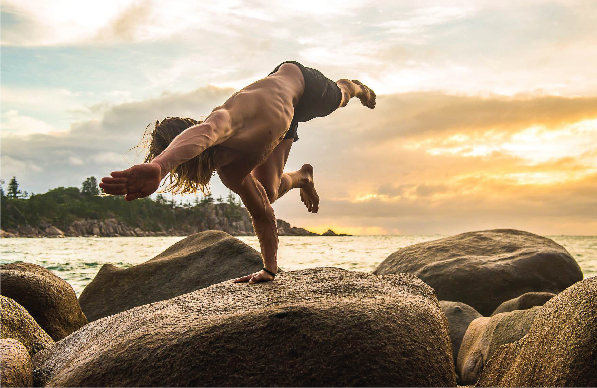 Yoga philosophy has always been a part of the practice in the way that I’ve learned it, and I like to share the teachings in this way as well. For me it’s very important to have a context for the practice; to understand Yoga as a way of life and to try and bring this into everything that is going on during practice, but then also to take the skills of mindfulness that is cultivated during practice, and implementing that in everyday life. Essentially all that we really need to know about Yoga philosophy is quite simple, and it actually transcends any school of thought. It is a Universal Law – Be Loving. Be kind. Be compassionate. Be truthful and live your truth. All the rest of the philosophy – about the different states of Samadhi, about the super powers, about whether the world is dualistic or non-dualistic, if there is a God, etc is worth educating yourself about, but not necessary to understand. As the Indians knew, there are different types of practitioners, Jnana Yogis, Karma Yogis, Bhakti Yogis and Raja yogis, and so some people will naturally be inclined to want to study and gain theoretical knowledge, while others are not called to pursue that path.

9. How would you translate negative events in life into your yoga practice?

One of the keys to mastery in life is to treat every setback as an opportunity for growth.

10. What advice would you give a well-practiced yogi to take their practice to the next level?

On the physical level then live a yogic lifestyle in regards to nutrition, sleep and develop a regular daily practice. Find an inspirational teacher to work with. The same goes for pranayama and sitting meditation practices. Continue to study so that there is an ongoing reference point to what the ancients were pointing us towards; otherwise it’s easy in the modern yoga scene to keep being pulled towards doing fancy postures that are empty of a connection to the source of the Yoga tradition. As I mentioned earlier, to go to the highest levels of Yoga is actually to keep coming back to the simple truths of living loving inter-personal relationships – of course this is the hardest level to attain success in!

11. As a yoga teacher, an active surfer and a music lover, do you think all 3 are complementing each other and how? 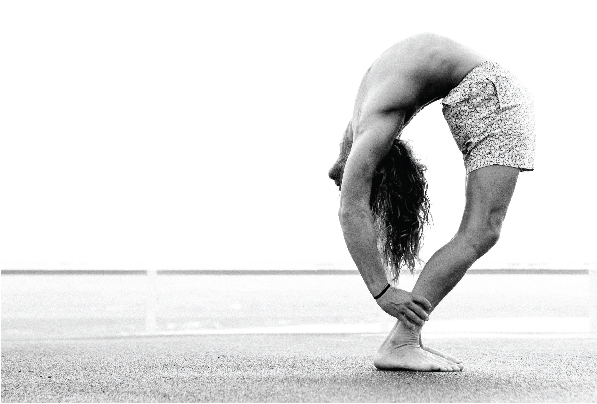 Absolutely, they go hand in hand. For me a perfect day would be to wake up early and do some yoga practice and then go surfing and then during the heat of the day play some guitar….and then repeat in the afternoon! To paraphrase Patanjali and his definition of abhyasa/ practice, all three require love and devotion, uninterrupted and consistent practice repeated over and over again for a long time. All three involve a connection with something greater than ourselves, and involve getting into the ‘zone’ or the ‘flow’, where the repetition of practice allows for everything to come Bouncy Castle together, so that the effort becomes effortless, and the body becomes an instrument through which the yoga, the surfing, the music happens.

Yoga to invoke your Inner Goddess