Migraine attacks commonly activate the sympathetic nervous system in the body. The sympathetic nervous system is often thought of as the part of the nervous system that controls primitive responses to stress and pain, the so-called “fight or fiight” response. This activation causes many of the symptoms associated with migraine attacks. It is characterised by moderate to severe headaches. It can cause intense throbbing, pulsing or pain in one area of the head and is commonly accompanied by nausea, vomiting, and extreme sensitivity to light and sound.

Migraine headaches often begin in childhood, adolescence or early adulthood. The pain peaks and then subsides and usually lasts for two to 72 hours in adults and one to 48 hours in children. The frequency of attacks varies, from a few in a life time to several a week; the average sufferer experiences one to three headaches a month. The head pain varies greatly in intensity too, and can be very severe.
Migraines may progress through four stages — prodrome, aura, attack and postdrome — though the sufferer may not experience all the stages. The phases and the symptoms experienced can vary from one migraine attack to another:

One or two days before a migraine, the sufferer may notice subtle changes that signify an oncoming migraine, including constipation, depression, diarrhea, food cravings, hyperactivity, irritability and neck stiffness.

Most people experience migraine headaches without aura. Auras are usually visual but can also be sensory, motor or verbal disturbances. Each of these symptoms typically begins gradually, builds up over several minutes, then commonly lasts for 10 to 30 minutes. Examples of aura include: visual phenomena, such as seeing various shapes, bright spots or flashes of light; vision loss; pins and needles sensations in an arm or leg; speech or language problems. Less commonly, an aura may be associated with aphasia or limb weakness (hemiplegic migraine).

When untreated, a migraine typically lasts from four to 72 hours, but the frequency of headaches varies from person to person. The sufferer may have migraines several times a month or less frequently. During a migraine, one may experience some of the symptoms such as pain on one side of the head; pain that has a pulsating, throbbing quality; sensitivity to light, sounds and sometimes smells; nausea and vomiting; blurred vision; diarrhea; lightheadedness, sometimes followed by fainting.

The final phase — known as postdrome — occurs after a migraine attack, when the sufferer feels drained and washed out, though some people report feeling mildly euphoric.

Yoga is one of the best remedies to treat and prevent migraine.

According to Hatha Yoga Pradipika

The brain is the father and the heart is the mother of our body. The brain has to give the right command to all the parts in the body. In the case of migraine, there is a state of confusion in the function of the brain. Asana and Pranayama help the balance in the Ida and the Pingala Nadi. Nadi means river or flow. Nadis are the nerves system or the nerve channel, which distributes the flow of consciousness or the Prana (Vital or Life energy).

When these two forces are in balance, a third force Sushumana gets awakened, which raises up the hallow tube of the central canal of the spinal cord. Surya Nadi, the solar or the right side is under the influence of the Pingala Nadi, which controls the sympathetic nervous system. Chandra Nadi, the lunar or the left side is under the influence of the Ida Nadi, which controls the Parasympathetic nervous system. Proper distribution of Prana can regulate the proper and efficient fuction of the whole body. Practice of inverted postures can improve the circulation in the body. Practice of some breathing technique and relaxation posture can give proper rest and prevent the attack of migraine. The balance in the body and the mind is a very important to tackle and come over migraine.

The following are a few important Asanas and Pranayama to be learned with the help of a teacher. Regular practice can build strong will power and improve overall health. 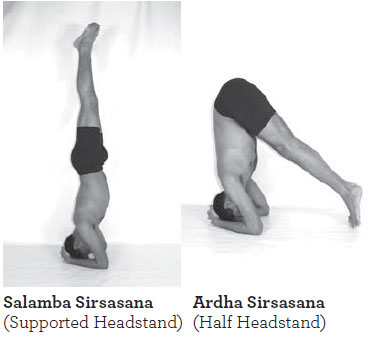 Headstand is the king of the Yogic asana. Inverting the whole body improves the blood flow to the upper body.

1. Place both forearms on the mat; the elbows are shoulder width apart. Interlock the fingers firmly.
2. Rest the crown of the head on the mat, so that the back of the head is touching the palm and the palm becomes support around the head.
3. After keeping the head position, raise the knees from the floor by moving closer to the head.
4. Stay here with the leg straight – Ardha Sirsasana (Half Headstand), which is for beginners to practice initially.
5. Once you have mastered Ardha Sirsasana, you can try to do Sirsasana (headstand) next to the wall with the help of the teacher.
6. Inhale, raise both legs up with the inner legs pressed together, toes pointing upwards.
7. Keep the body in a straight line by pressing the upper arms down and the shoulders up.
8. Stay for 2 to 5 minutes and relax. 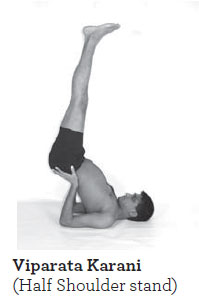 1. Lie flat on the back on the mat.
2. Keep the legs stretched straight.
3. Inhale, bend your knees, pressing the palms down on the floor and raise the hips up to the ceiling.
4. When the whole trunk is raised off the ground, bend the elbows and place the palms on the back of the pelvis.
5. The weight of the body is on the palms, elbows and the upper arms.
6. Keep the legs straight but relaxed. Alternatively, you can slightly bend the knees.
7. Stay for about 2-5 minutes with normal breathing.

This calms the mind and improves proper blood circulation and the prana in the entire body. 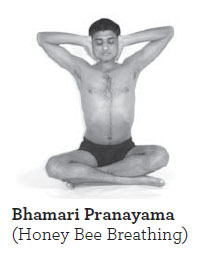 1. Sit in a comfortable asana like Padmasana (lotus pose) or Sukhasana (Easy cross legged pose).
2. Keep the back erect and the shoulders relaxed.
3. Close the ears with the palms, thumbs facing down towards the shoulders.
4. Press the heel of the palms on the temples to relieve the headache.
5. Inhale deeply and exhale softly with humming sound like the murmuring of the bee.
6. Repeat this for about 5 minutes. 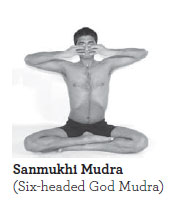 1. Sit in a Padmasana or Sukhasana.
2. Raise the hands to the face with the elbows level to each other.
3. Use the thumbs to close the ear holes; index fingers on the eyelids; the middle fingers to close both nostrils partially and equally; and the ring fingers and the little fingers on the upper and the lower lips.
4. Stay in the position as long as you can, drawing the vision inwards with the rhythmic breathing.

This brings a sense of harmony in the body and the mind. 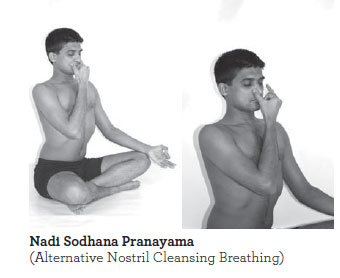 This is an important pranayama as the name states its benefits. Nadi means the veins or arteries which circulate the Prana. 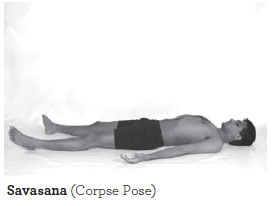 1. Lie flat on the back like a corpse.
2. Keep the palms facing up and slightly away from the sides of the thighs; keep the legs apart.
3. Close your eyes and if possible, place a small cloth to cover the eyes.
4. Start with some deep breathing. After few rounds, calm down your breath and concentrate on the rhythmic slow breathing.
5. Keep the mind passive and in silence for 10-15mintues. The body is resting, the mind is calm while the breath is slow.

This is a ultimate state of relaxation one needs during the time of Migraines.

Migraines can be triggered by certain food or scents etc. It is important to know the trigger point in order to avoid it.

In addition, an average adult needs six to eight hours of sleep a night. Further, it is best to go to bed at a regular time. One must establish a daily routine with regular sleep patterns and regular meals.

Asana and Pranayama improve the neuromuscular activities and control the entire physiological function of the body and the psychological structure of the mind. Progressive muscle relaxation, meditation and Yoga can make a big difference in our life styles to tackle and prevent the attack. Practice of Yoganidra can give the ultimate relaxation to the body and rest to the mind. Regular practice of Asanas reduces stress and prevent migraines and reduce medications.

Yogesh started practising Yoga from the age of ten and is well qualified in Yoga after completing his studies in diploma and postgraduate diploma in Yoga and Naturopathy. He has been a close disciple of the legendary Yoga Guru Dr. Asana Andiappan of South India and has won many Yoga Awards in both Zonal and District level competitions.

How yoga is beneficial in the treatment of Post Traumatic Stress Disorder by Shelley M. White

Meditation and its Physical, Energetic and Mental benefits