After the success of 1st UN International Day of Yoga (IDY) last year, the 2nd UN IDY befittingly turned out to be the biggest yoga event in Hong Kong this year as more than 2500 Hong Kongers gathered at the Sun Yat Sen Memorial Park today to know the benefits of yoga for health and well-being and also to follow a simple Common Yoga Protocol.

The audience included various government officials, Consul Generals, representatives of other governments, distinguished members of the community.  The event was held in partnership with UNESCO Hong Kong Association. 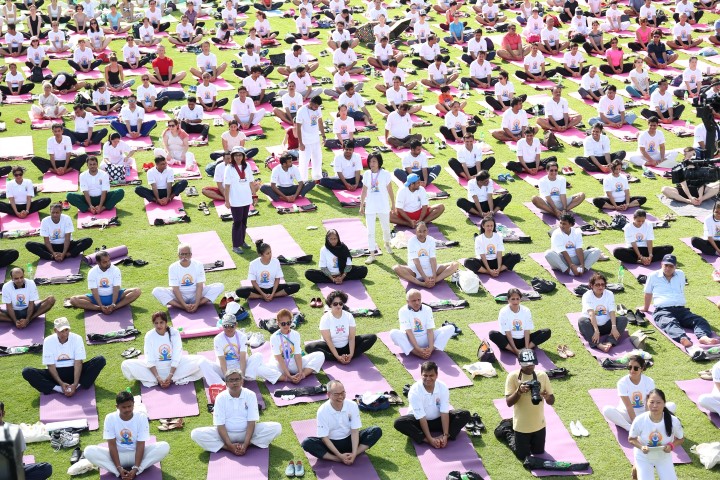 Hon’ble Secretary for Home Affairs, Mr. Lau Kong-wah, was the ‘Guest of Honour’.  India’s Acting Consul General Mr. Ravi Sinha welcomed the gathering and underlined the benefits of Yoga for the health and wellbeing of individuals and communities. About 30 Yoga and health organizations of Hong Kong supported the event and were present.
All guests joined together to perform some simple Yoga exercises and meditation under a common Yoga Protocol, under the guidance of well-known Yoga teachers. This was followed by a number of free modules and classes offered to participants. An exhibition on Yoga was also organized on-site for participants. A large media contingent was present to cover the event.
In addition to this main programme, many events and workshops are being organized throughout the day by many Yoga institutions on June 19, 2016. Volunteers of Andiappan Yoga Community were also present at the event assisting the participants.The United Nations General Assembly had adopted the resolution at its 69th Session with a record 177 co-sponsoring nations to observer 21 June every year as the International Day of Yoga.