In Sanskrit, “Kukuta” refers to the Cock and “Urdhva” means upward. Urdhva Kukutasana is one of the most difficult and challenging postures in Ashtanga third series. To perform this pose, one needs significant balance and coordination, in addition to greater strength and flexibility.

Since the ability to do Padmasana with ease is such a fundamental requirement to perform Urdhva Kukutasana, do include hip opening postures in the preparation. I suggest that begin with a variety of external inflatable slide hips rotated standing postures, eg Virabadrasana 2 (Warrior 2), Utthita Trikonasana (Extended Triangle), Uttita Parshavakonasana (Extended Side angle) as well as series of seated hip openers eg Agnistambhasana (Double pigeon pose), Badha Kansana (Bound angle pose), Akarna Dhanurasana (Shooting bow pose), and Ardha Dandha Padma Paschimattanasana (Seated bound half lotus forward bend). Regular practice of these asanas helps you to get full range of motion from the external hip rotators muscles.

After the Padmasana preparation, go on to strengthen the hip flexors by bringing the Padmasana to the armpit either in headstand or from handstand. Several muscles across the front of the hip helps to create the hip flexion (pulling the thighs and trunk toward each other). Iliopsoas is the major and most powerful flexor muscles of the trunk at pelvis, and the other muscles are rectus femoris, sartorius and tensor fasciae Latae.

It is actually comprised of two muscles, the Iliacus and the Psoas major, together known as Iliopsoas, which lie deep in the back of the abdomen. The Psoas muscle originates (T12, L1-L5) along the lumbar spine and an intervertebral disc then descends obliquely to attach at the Lesser Trochanter of the femur (thigh bone) along with Iliacus. The Iliacus muscle originates to the upper two-thirds of the Iliac fossa then descends to join the Psoas major tendon, with some of its fibres attaching directly to the femur near the Lesser Trochanter. Hence, it’s also important to stretch and strengthen this muscle to bring your thighs (Padmasaana) into your armpit. Padma Bhujangasana (Cobra in lotus), Supta Vajrasana (Supine diamond) and Dragon poses are excellent postures for stretching the hip flexors, and make easier to contract them strongly in Urdhva Kukkutasana. 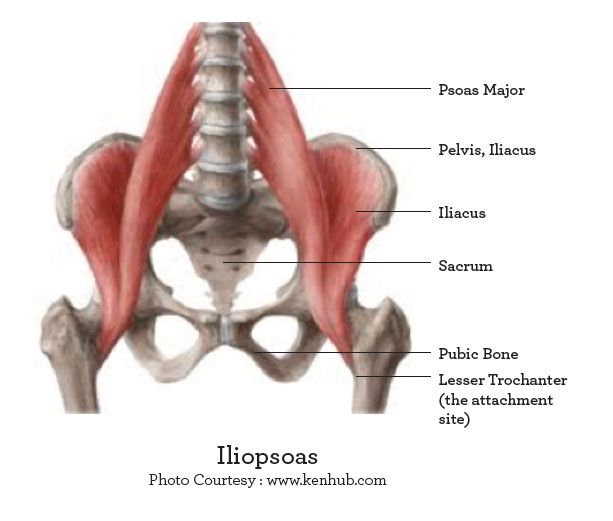 Building the Base (Tripod Headstand)

1.From diamond pose, place the hands on the floor beside the knees and place the crown of head on the mat in front of the knees, the crown of the head and centre of the palms form a triangle shape. Ensure that forearms are perpendicular to the floor and the upper arms parallel to the floor; elbows should be directly above the wrists. Keep a strong foundation by grounding through the hands and head.
2.From here, lift the knees and walk towards the head until the hips are directly above the shoulder.
3. Keep hugging the hips towards the midline and gradually lift the legs by lengthening the spine into Tripod headstand.

4. From Tripod Headstand, gradually and with control, bring the legs into Padmasana.
5.Engage the abdomen, then flex the hips and draw the knees towards the chest.
6.Keep engaging the lower ribs and the abdomen, round the spine to bring your knees  (Padmasana) into the armpit. The more deeply you can fold yourself while keeping the spine lengthened, the easier it will be to draw the knees deeply into the armpits.
7. Once the knees (Padmasana) are landed on the arms, use the power of the hips and core to drive the knees toward the armpits.
8. Take a few breaths here to focus the attention and gather energy to lift the head.

There’s no doubt that lifting into Urdhva Kukkutasana requires strength, but much less strength than many would think.
9. To lift the head, draw in the shoulder blades against the chest and pull them towards the waist. Keep pushing the elbows away while squeezing them inward, and grounding through the hands. These actions are crucial to lifting the head off the ground and getting into Urdhva Kukkutasana. Having a inflatable water slide regular practice, determination, focus and courage as well as counterbalancing practice helps to succeed in the pose.

10. To lift the head from the floor, continue to press the hands into the floor by drawing the shoulder blades against the back.
11. Exhale; slightly drop the buttocks towards the floor. The momentum of this movement will help to draw the shoulder blades down the back.
12. Inhale, lift the sternum forward and up, then gradually hinchables lift the head off the floor and look forward.
13. Keep extending the spine by lengthening the neck, and push the arms straight. Finding the rhythm of counterbalancing enables the lift In the beginning, you may fall over backward or forward. With regular practice, you’ll find the way to bring your knees even further into your armpits. Then the pose will feel more and more as though it is supporting itself.
14. Stay in Urdhava Kukutasana with normal breathing.
15. To come out of the posture, bend the elbows and lower the buttocks to the floor or with control, bring the head down on the mat into Tripod Headstand and then unravel the legs.
16. Rest in Child’s pose or from Tripod Headstand, jump back into Chaturanga Dandasana.