The cosmos is within us. We are made of star-stuff. We are a way for the universe to know itself.

My Friday morning Kundalini yoga class, the one I’ve been teaching for years, just came to the end of its recent session. The pause in rhythm has me thinking about this practice, its fundamental nature and what it does for people. What other yogic science combines rapid breath with rapid movement? And in what other yoga practice do we find ourselves maintaining parco acquatico gonfiabile the most challenging, and often absurd, physical postures while breathing rapidly, or chanting, or both? If someone completely unfamiliar with the practice were to walk into a random class midstream, they would likely stand speechless for a second, wearing a look of confusion as unspoken thoughts scream the question: “Now why would anyone want to do that!?”

Everyone in the yoga tribe would say the answer is simple: because it works. While most of earth’s humans would acknowledge that yoga has benefits, there is an ever-growing planetary tribe that has come to depend on the practice for stress relief, strength, flexibility and… sanity. If life were like a river, as the mystics often say, then yoga is the flotation device that allows us to flow with the current a bit more calmly.

What then do we say about kundalini yoga? Perhaps that it is a bit like passing over a stretch of rapids, the kind that make you feel really good when you’ve gotten through. After a succession of active postures, that final pause for stillness can feel like a momentary landing in some tranquil, sun-bedazzled pool. Kundalini yoga is designed to turn things up. Conceptualized as fire, the practice stimulates the life force energy located within every human body, allowing it to rise in frequency, providing more attunement and resolve as we embrace the challenges of life. The term “raising kundalini” describes the process of igniting the inner fire and purity of energy, not unlike the fundamental laws of nature explained in quantum physics.

We float in a universe made up of waves and particles, according to quantum physics. These particles and waves move through a universe that is ever-expanding in a pulsating rhythm liken to breath. Matthew Fox, the great radical catholic priest, philosopher and social activist, said that “we too, are both waves and particles- not just individuals but also the expression of the Cosmic Christ (or Buddha Nature) in all things.”

The atomic body also contains photons of light. When the particle containing these photons increases in temperature, it emits more energy. Planck’s Law explains that not only do they increase in energy but overall, a larger proportion of the energy tends towards the violet end of the spectrum. Now, to the modern physicist, the “violet end of the spectrum” means an entirely different thing than it does to the modern yogi. When we think violet, we think chakra, and we think auric field. Still, the parallel is remarkable. Would it not stand to reason that when we practice a yoga that combines breath of fire with rapid, temperature-raising postures, we’re not only increasing our energy force, but also aligning ourselves more fully with the violet light of high chakra consciousnesscultivating the divine within.

Yoga tribe members know the descent into self that occurs at that nascent point during a mighty flow class or after a series of intense kundalini poses. It may come in that 8th downward dog or seated cross-legged, pausing to integrate after holding bow pose with breath of fire. Whatever the path to arrival, we discover what it’s like to find oneself and lose oneself all in an instant. Our auric fields pulsate at a higher frequency and those who can view their colors often report seeing a rose-violet light. 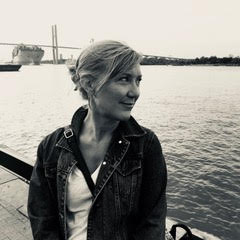 The river never stops running, and the universe will always take its next breath. If we are part of the dance of life, why not experience that arrival, that al i vednesswhy not experience what it’s like to be that small particle, hitchhiking on the wave of the divine.