Living in the now has been around for a long time, back when now was in the past, from about the time mirrors and cast iron were invented. “The secret of health for both mind and body is not to mourn for the past, worry about the future, or anticipate troubles, but to live in the present moment wisely and earnestly,” said Gautama Buddha more than 2500 years ago.

Nowadays living in the now gets a lot of play. It has become a power phrase, meaning be aware of the moment, get out of your stream of thoughts, and make your life happen in the present. All you have to do is remember to do it amid the distractions of the modern age.

It used to be easier living in the now than it is now. Back when it was archaeological, much of life was spent in the slow lane, unlike now, when everyone is in the passing lane. Thousands of years ago everyone wasn’t always thinking about something that had happened, or might happen, or what they needed to do right now.

There wasn’t a whole lot happening, in any event.

They didn’t multi-task. There was no need to disconnect because no one was connected. It was more of a single-task time. They didn’t drive fast here and there and everywhere. Ox carts and horse-drawn wagons were generally one-speed. They didn’t have to appreciate nature because there was a lot of it, anyway.

There was no need to take time out from the office for a nature walk.

Nonetheless, way back when, even Roman emperors, who had a lot to do, beating back barbarians and planning the next conquest, recognized the savvy of living in the now. “Man lives only in the present, in this fleeting instant,” said Marcus Aurelius. “All the rest of his life is either past and gone or not yet revealed.”

Even not so way back the wisdom of living in the now was appreciated extolled recommended. “You must live in the present, find your eternity in each moment,” said Henry David Thoreau. “Fools look toward another land. There is no other land, there is no other life but this.” 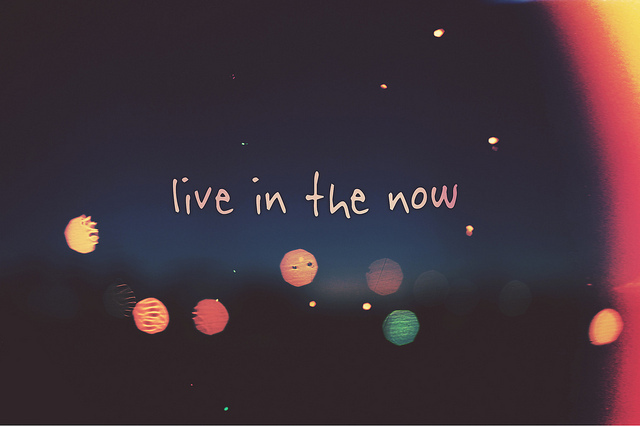 In our own time Oprah Winfrey has passed sentence on the past and the future. “Living in the moment means letting go of the past and not waiting for the future,“ she said. “It means living your life consciously, aware that each moment you breathe is a gift.”

The Now Generation is the Me Generation gone fast forward and widespread. Before the 1960s gratification was often postponed in favor of the future. But in the blink of an eye self-sacrifice became self-fulfillment. In the 70s and 80s the immediacy of lived experience and self-gratification became the lifestyle choices of a generation.

When Nike unveiled its ‘Do It Now’ slogan in 1987 it hit a home run. Before the end of the century its business grew by more than 1000 percent.

In the 21st century we spend about half our time thinking about something other than what we are doing, according to a study conducted by Harvard University. The only exception is sex, when almost everyone has his and her mind on the job at hand. Very few men or women whip out their iPhones when they’re in the moment, since they’re having a ringing good time, anyway.

The benefits of living in the now are many, notwithstanding better Not Now sex. Those benefits include less worry-warting and over-thinking, fewer distractions and improved concentration, putting your focus where it counts, getting things done, and having a richer experience from a direct-felt comprehension of reality. Staying foursquare in the present helps you be more creative, more decisive, and more happy, too, since you’re not lamenting the past nor fretting about the future.

Yoga has long been associated with living in the now. “There is so much power in the experience of the present moment that whole spiritual disciplines have been created solely to bring us into the now,” according to Kino MacGregor, an Ashtanga Yoga teacher and writer about the discipline. Some of yoga’s eight limbs, or precepts, can only be practiced in the moment. You have to root your consciousness in them to get anywhere.

Much of yoga practice is predicated on practicing with no judgment and no expectation. In other words, just do it. In so doing, the past and the future have nothing to do with it. Getting on a yoga mat means getting off the merry-go-round of attachment and goals.

The first thing Patanjali, the godfather of yoga, says in the Yoga Sutras is, “Now begins instruction on the practice.” He doesn’t say, never mind, we did that yesterday, or, we’ll get to that tomorrow. He says there’s no time like the right time, which is now.

“When life seems crazy and fast and full of distractions, I just remember that yoga is now,” explained Hayleigh Zachary, a Los Angelesbased teacher trainer.

It’s often said yoga takes you into the present moment, the only place where life exists. Don’t become attached to anything, just flow with it. The past can be depressing and the future an anxious place.

Being in the flow of the hereand- now means bringing a focused concentration to your game, dissociating yourself from distractions, ignoring the irrelevant. Being in the zone is like tunnel vision. Everything happens in slow motion, everything extraneous falls away, and everything you accomplish in the zone is effortless and purposeful.

You forget yourself and you become yourself, even though the phrase, which dates from the 1970s, came from the TV show The Twilight Zone and means, more-or-less, “out of this world.”

Although living in the now, savoring the experience, has its benefits, ignoring the past can have its costs. Remembering the past is a way of learning from it. It’s long been said, those who forget the past are doomed to repeat it. When you’re engulfed by the now, it’s hard to remember anything except right now. A life without past or future is like a tree without roots, a tree without buds in the spring. It’s like jumping off a skyscraper and on the way to the sidewalk looking around with a happy smile, so far, so good.

But, the past is disappearing fast and there ain’t no future in the trip down.

In 1876 the Republican Rutherford B. Hayes ran for President of the United States against the Democrat “Centennial Sam” Tilden. Samuel Tilden won the popular vote, but when the votes were re-counted in Florida, the election was cast into the hands of an electoral commission, and one Republican Supreme Court justice decided the contest. “Centennial Sam” went home. “Rutherfraud” B. Hayes went to the White House.

One hundred and twenty four years later another Democrat won the popular vote, the election was thrown into doubt by hanging chads in Florida, and the ultimate decision of who would sleep in the East Wing came down to one Republican Supreme Court justice.

If the consciousness-raising Al Gore hadn’t been living completely in the now of the campaign, and had heeded his history lessons, he wouldn’t today be known as the man who for a few short weeks was the next President of the United States.

Politicians of all stripes believe in the tyranny of now. Rah, rah, rah, vote for me, take it or leave it, never mind what I said ten minutes ago. The bad old days are in the past. The future isn’t promised to anyone unless we make it happen today. That’s how they get elected. However, Donald Trump’s cynical 2016 campaign demonstrated the power of applying lessons from the dark past, even though those lessons were miserable and mercenary.

The only consolation is that he will almost surely twitter now away and his time will pass.

The problem with living in the now is that in nothing flat it’s gone. It’s always in momentum. It barely exists. If yoga is a practice of consciousness, the issue with now is that you can never be fully conscious of it. You can’t concentrate on it, be conscious of it, because it is so fleeting. The stream of consciousness on a yoga mat is one thing, but following the bouncing ball of now to nowhere is another thing.

In the 19th century American cities suffered high rates of typhoid, cholera, and yellow fever. The epidemics were especially deadly to children. Many infectious diseases were the result of unmanaged waste and dirty water. In time people got tired of living in the now. They brought the future into the present so something could be done about the past.

Nowadays Americans rarely suffer from typhoid or cholera, and never think about what now was like a hundred years ago. We don’t have to worry about anyone on the mat next to us who might have yellow fever, because someone a hundred years ago was committed to making things better for us.

Another problem with living in the now is that when we make choices in the moment without considering how they will be remembered in the future, we are playing with fire.

He came up snake eyes.

Jerry Rice and LeBron James have both described themselves as students of the game. They learned their lessons from the past so that they wouldn’t have any regrets. Pete Rose, on the other hand, flaunting the past, made sure he got nothing for something, forever tarnishing his legacy.

A compounding problem with living in the now is that now goes hand in hand with the past and the future. They are not three separate entities. The nature of time doesn’t work that way. When Alice asked the White Rabbit how long forever was, he said, “Sometimes, just one second.” When someone practices yoga in the now, they are practicing a five thousand year old discipline. It’s not a popup. It’s not going to disappear when you roll up your mat, even if you disappear. It is likely yoga will be fashioning split seconds into forever five thousand years from now.

Time has long been thought of as a river, time passing by, never recovered. It might be better, however, to think of it as spacetime, in which the past, present, and future are materially identical. They all exist on a par with each other. We are spread out in the fabric of time. The past and the future are inaccessible because now, where you are now, is in a different part of spacetime.

“What we are today comes from our thoughts of yesterday, and our present thoughts build our life of tomorrow,” said Buddha a long time ago. “The distinction between the past, present, and future is only a stubbornly persistent illusion,” said Albert Einstein not so long ago.

Forever is made up of everybody living in the now. Don’t miss out on forever. Be here now.

Edward Staskus lives in Lakewood, Ohio, on the northeastern edge of the Rocky River valley. Read more of Ed’s writing at www.paperbackyoga.wordpress.com.