Righteousness is often misinterpreted as haughtiness or pride. Its origin is the Greek dikaiousouna, which at root means the qualities of a person living by integrity, virtue, and uprightness in thinking and acting.

A wider and more complete notion of a righteous act is that of a person performing their duty to the fullest of their capabilities. In this sense, if a thief was doing the very best they could at stealing; one could accurately describe them as a righteous thief.

My work to be a righteous yogi in the good sense brings me to my work of discernment in the moment, when the contraries press me into awareness. In the days ahead, these contraries will lead me to examine how and why fate led me to this place.

How did I, a Midwest male of European-American descent, end up lying on my stomach – spine arching up in the discipline of ancient Indian mind/spirit/science – to impersonate an Egyptian tomb-protector with the face of Pharaoh?

Who is it that stretches and lifts at the direction of an Indonesian-American woman; on an island in the middle of the Pacific – one that is rightly the property of ancestral Polynesian Americans – that most of us know as Hawaii.

The righteous curriculum I attend is a great melting pot of diversity and energy. It’s a warm cultural pastiche animated by the restlessness and wisdom of cultures young and old; next to me are Americans and Indians, and around the room, Hawaiians and Asians. With or without a lion’s body, they appear sphinx-like.

The yoga room is one of the few places where people formulate a physical manifestation of global influence and spiritual synergy; indeed the seekers are everywhere. We righteously pose as if we were sphinx even though some of us are historically, culturally, and physically disconnected from a living experience with this iconic image.

But in yoga, all of us are sphinx, cobra, and camel; we look ridiculous on the surface, but like yoga itself, within each pose is a beautiful story of reaching and lifting. 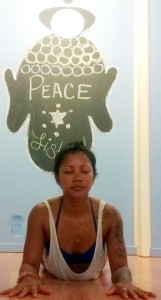 Ears forward, I hear my teacher continue in clusters of daring. Her wisdom of the way comes to me from her bloodline far to the east. Her directions are clear and precise. “Palms flat, elbows and forearms on the mat and forward” she said while guiding us into sphinx pose.

Ushered into the mystery of sphinx, each of us gazed to the horizon. I lifted my spine and imagined never moving, as if I were turned to immobile stone.

From a basic art education, I was aware of the hard limestone bedrock sculpture called the Great Sphinx of Giza; but from a more extensive study of Greek classics, I’ve been captured by the image of the Greek sphinx, which adds eagle wings and a woman’s head. The Great Sphinx of Egypt displays Pharaoh’s head and lion’s body but no wings.

I stop my mental wandering and arrive back to my teacher’s directions which turn me once again to my gaze and gently arching spine. I rest on bent elbows, forearms, and flat palms. They are the pillars of salamba bhujangasana. Their stability holds me as I embody sphinx to the fullest of my righteousness.

Forgetting about the hard limestone sphinx, palms down and head lifted, I observe myself and am aware of others: some with long manes, a lion-woman finding more peace in this moment; and some with short manes, the tall and broad man with less war.

I am happy to see these living embodiments to mystery and mythology. We are material and matter and we do yoga from the ground up. And I am certain that since she has taught us to lift and to land, we will rise up, even on righteous wings of flesh most unsuited for flight.