Despite that yoga had been brought to the West for several decades already, some men still carry inaccurate assumptions, such as its gentle or just about flexibility, towards the practice.

A Yoga in America Study conducted in 2016 by Yoga Journal and Yoga Alliance found that, over five years, the number of people practicing yoga has grown from 20.4 to 36.7 million. The female to male ratio was at a severely imbalanced 72% to 28% however, which meant that women still dominated the class. But interestingly in India, Hatha yoga, the physical form of yoga, was once a practice exclusive only to men and it only began to gain prominence around an early 20th century.

The citizens, driven by nationalism, developed fervor for strength-building and different exercise systems fusing western and India disciplines were developed in the name of ”yoga” with their teachers masquerading as gurus to shun authorities, traveled the country to impart these combat skills to revolutionaries.

There were others who were more interested in reforming the country’s physical culture and one of them was Manick Rao. Rao had a student Guru Swami Kuvalayananda, an incredibly influential yogi at that time who became the teacher to the guru T. Krishnamacharya. Deemed ”father of modern yoga” today, Krishnamacharya himself would nurture four of the world’s most influential yoga teachers of the 20‘th century —B.K.S Iyengar founder of Iyengar yoga, K. Pattabhi Jois founder of Ashtanga Vinyasa, Indra Dev and T.K.V. Desikachar.

Up until then, Hatha yoga was practiced solely by men and by combining some of the traditional asanas with Indian wrestling and western gymnastics, Krishnamacharya created a new and powerful physical system especially for male Indian youths. He refused female students and it wasn’t until an introduction by the Maharaja of Mysore that he finally accepts Indra Dev as his first female and western student. Born Eugenie Peterson, Dev came from Russian nobility but escaped, with her parents, to Berlin after the Russian revolution in 1917 where she became an actress and dancer.

After moving to India in 1927, she renames herself as Indra Dev and found success as an emerging star of Indian films. Through her husband the Czechoslovakian diplomat of India, Jan Strakaty, she befriended the Maharaja. Dev would eventually complete her first book on yoga, have it published in India and become recognised as the first western teacher in the country.

In 1947, Dev relocated to Hollywood after her husband passed away and became the first disciple of Krishnamacharya’s to open a yoga school in the West in his lineage. Dev was able to adapt the breathing and relaxation techniques in yoga to help with the acting craft and this brought her a loyal following of Hollywood elite which included Greta Garbo, Gloria Swanson, Robert Ryan, Jennifer Jones, and the renowned violinist Yehudi Menuhin.

Through Dev, skincare and cosmetics specialist Elizabeth Arden became such a fan of yoga that she started to offer it as part of the health programme at her spa, further promoting the practice and its benefits to housewives and women of America. From the 50s to 70s, there would be two more figures who would significantly raise the popularity of yoga amongst the ladies. 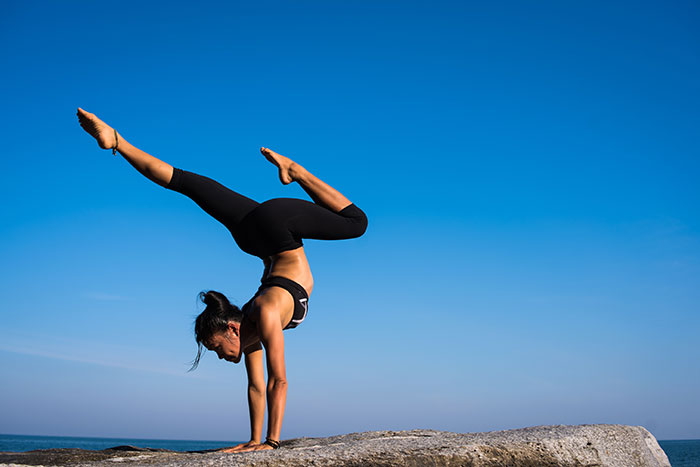 Back from studying yoga in India, Richard Hittleman proceeded to publish books on the subject in the 50s, selling millions of copies by making it accessible and easy to comprehend for the layperson.

In the 60s, he launched Yoga for Health, teaching classes through television, instantly reaching a massive audience. Hittleman always used ladies to demonstrate the poses further deepening yoga’s association with women even more.

There was a new heroine in yoga by the 70s. Her gentle manner and easy-to-follow steps and poses helped mainstream America discover yoga. Lilas Folan and her TV programme Lilas, Yoga and You was a big hit with the female audience, especially housewives, establishing the idea that yoga is more suited to women, a label that hasn’t quite shake off until this day.

Looking back at its recent history, it’s clear yoga wasn’t intrinsically designed for women, but it’s gained a feminine association and qualities that were unbefitting to the concept of exercising for a western male over the years.

Sports and exercise go hand-in-hand for guys and it also represents challenge and competition. Men thrive competing in sports and this attitude carries over to exercising —who can lift heavier weights, who did more pull-ups… but this competitive aspect is atypical of yoga.

The image of an ideal male physique is strong, powerful and muscular but over the years, yoga has gained an image of a slender, svelte female figure through advertising and celebrity endorsement and association.

Yoga is as much a workout for the mind as it’s for the body but there’s some level of machoism when it comes to fitness where men subscribe to the idea of no gain without pain. A holistic practice can simply feel too new age or emotional.

For yoga to appeal to men, it would help to address some of the qualities above. Over the years, different organisations and studios have worked on shifting the image of yoga by raising its association with men, from having more male instructors to a more visual representation of the male gender.

That’s just one level, more importantly, at the grassroots level, there needs to be a shift in how yoga is taught so it speaks a language that isn’t so foreign to guys like giving more focus to physicality. I’m constantly visiting new studios and classes in my city and from personal experience, male attendance is always higher when a class is listed as ”strong” or “powerful”. Add ”hot” or ”heated” and it gets even better! This is proof of the “no pain, no gain” attitude when it comes to exercising for men. A class that’s too holistic and too touchy-feely can be alienating so balancing it out with attention to movement and body could help.

Surely, a gender imbalance as such would imply an untapped potential of the male audience waiting to be harnessed? Yoga isn’t the reason for their absence, it’s the environment that it’s practiced in.

Lately, at the gym, I’ve been noticing the exercises that the men are doing pre and post-workout. All of it was asanas pretty much! It shows that guys didn’t just accept their benefits, it wasn’t so feminine, and they had no qualms practicing a bit of yoga after—all!

To get them into a studio, we need to start offering an environment that feels comfortable and familiar.

Biography: Hongyi’s interest in yoga began in his 20s. He was practicing Iyengar yoga back in his birth home and found that it relaxed a hyper and over-active mind. After moving to London, he discovered that there was a myriad of styles and began to explore the different types of yoga the city offered. He has been practicing the vinyasa style since and appreciates the dynamism and physicality as well as calming qualities. He embarked on a teacher training to deepen his knowledge and practice and found his interests piqued by the ancient teachings and its application to modern life. Today, he maintains a regular vinyasa practice and continues to explore the subjects presented by yogic philosophy in modern context.