Dyslexia is a learning disorder characterised by difficulty reading. Also called specific reading disability, dyslexia is a common learning disability in children. Most people with dyslexia also have trouble with writing and spelling. In addition, some have difficulty with numbers. Dyslexia occurs in children with normal vision and intelligence. Sometimes, dyslexia goes undiagnosed for years and is not recognised until adulthood. Dyslexia is learning disability and basically we need to increase the awareness and activate the five senses of the body. By activating these marma points, in the face we can activate the brain.

Dyslexia affects about 10 to 15 percent of school-age children. About four out of every five children with dyslexia are boys. The disorder affects all races equally and is the most common type of learning disability. The earlier a child is diagnosed with dyslexia, and the earlier the child’s family and teachers are made aware of the diagnosis the better. Children with dyslexia must learn to read in a different way from those who do not have the disorder.
Many children who do not have their dyslexia diagnosed until later do poorly in school year after year, as they try to learn to read the same way everyone else does. Eventually, after their dyslexia is diagnosed, they must go back and relearn how to read.

There are several types of dyslexia (or learning disabilities) that can affect the child’s ability to spell as well as read. The types are identified by the nature of the problem within the central nervous system or brain. 1. Trauma Dyslexia usually occurs after some form of brain trauma or injury to the area of the brain that controls reading and writing. It is a permanent brain injury rarely seen in today’s school-age population because it results from severe head injuries. 2. Primary dyslexia is a dysfunction of, rather than damage to, the left side of the brain (cerebral cortex) and does not change with age. Individuals with this type of dyslexia are rarely able to read above a fourth-grade level and may struggle with reading, spelling, and writing as adults. Primary dyslexia is passed in family lines through their genes (hereditary). It is found more often in boys than in girls. 3. Secondary or developmental types of dyslexia is felt to be caused by inflatable obstacle course hormonal development or malnutrition during the early stages of fetal development. Poor parenting, abuse, neglect, and/or poor nutrition during the developmental years 0 to 5 are also known causes. Developmental dyslexia diminishes as Yoga Marma for Dyslexia the child matures. It is also more common in boys. This type of dyslexia is most often found in special education classes. It is this category of dyslexia or learning disability that responds best to the classroom accommodations and modifications found in special education classrooms that assist the child with learning while his nervous system continues to develop.

Sthapani, vidura, sankha, simhata, adhipathi, krikarthika and apanga are useful marmas for dyslexia. These control the five senses of the body. Apanga, krikarthika marmas are related to eyesight. Vidura marma is associated with hearing, and phana marma for smell. Shrigataka marma is associated with tasting; and sthapani marma which is associated with the pineal gland which controls the skin colour and skin sensing the temperature. All the marmas mentioned above are present in the opposite side also.
Except Sthapani Marma, Krikarthika Marma and Adhipathi is single marmas. In yoga, control of five senses is called prathynahara which leads to dharana (concentration) which is very important for relieving dyslexia. Yoga nidra can be done by concentrating and relaxing these above points. This can be achieved by even doing nindra padasana and setu bhandasana. 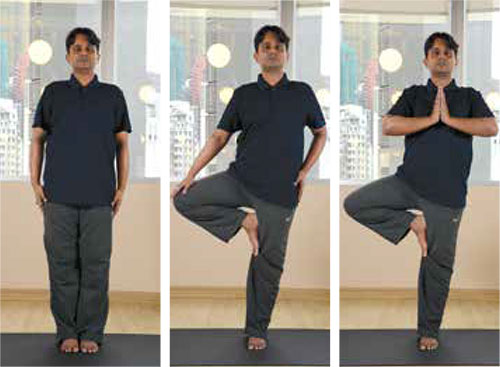 1. Stand erect, with hands parallel facing downwards.
2. Raise and bring the right foot touching the left thigh
3. Raise both hands in anjali mudra and bring both hands to the heart, hold the pose for 30 seconds.
4. Repeat the same with the opposite side.

1. Fold the knees and keep the feet hip distance apart on the floor, 10-12 inches from the pelvis, with knees and ankles in a straight line.
2. Keep the arms beside the body, palms facing down.
3. Inhale, slowly arch the lower back, middle back and inflatable water slide upper back off the mat; gently roll in the shoulders; touch the chest to the chin, supporting the weight with the shoulders, arms and feet. Feel the buttocks firm up in this pose. Try to keep both the thighs parallel to each other.
4. If desired, interlace the fingers and push the hands on the floor to lift the hips a little higher, or support the hips with the palms.
5. Keep breathing easily.
6. Hold the posture for a 30-40 seconds.
7. Exhale, gently release the pose.

Benefits:
Setu bhandhasana helps release tightness in the stress muscles. It streches the chest, neck, spine and the thighs; strengthens the back, buttocks, and hamstring muscles. It activates vidura marma , krikartika marma and shrigataka marma. It calms the brain and central nervous system which helps alleviate stress and mild depression.

Master Vishnu is a qualified Ayurveda and Yoga Therapist who hails from a traditional Indian family near Tirupathi, the holy city. He holds Master of Yogic science and master of philosophy in yogic science and currently pursuing his Ph.D in yoga.