Seizure, occasionally referred to as a fit, is defined as a transient symptom of “abnormal excessive or synchronous neuronal activity in the brain”. The outward effect can be as dramatic as a wild thrashing movement or as mild as a brief loss of awareness.
The medical syndrome of recurrent, unprovoked seizures is termed epilepsy. The World Health Organization estimates that around 50 million people in the world have epilepsy

Epilepsy is a neurological disorder, which affects the central nervous system. In other words, it is a disorder of the brain’s electrical system. Abnormal electrical impulses cause brief changes in movement, behaviour, sensation including loss of consciousness or awareness. When the nerve cell activity in the brain is disturbed, it causes a seizure.

The central nervous system provides control of the entire body. In general, it controls rapid movements of the body, such as muscular contractions, rapidly changing visceral events, and even the secretion of the endocrine glands.

The brain is a powerhouse, where nerve cells like neurons use chemical reaction to generate electricity like a complex hub.

A neuron may “connect” either with another neuron or with a muscle fibre. Neurons do not actually touch. There is just enough space to prevent the electrical transmission crossing from the first neuron to the next.

When the neuron becomes excited, it passes an electrical signal on its thin biological wire called an axon. Axon is a nerve fibre; long, slender projection of a structure gonflable nerve cell, or neuron, that typically conducts electrical impulses away from the neuron’s cell body. The function of the axon is to transmit information to different neurons, muscles and glands.

Axon transmits electrical signal from one neuron to another neuron. When too many neurons get excited, a seizure can happen. A seizure is like a electrical storm in the brain. During this abnormal electrical storm, the involved part of the brain cannot perform the normal task. People experience sudden alteration in movements, sensation, awareness or behaviour.

Seizures are a symptom of something going on in the brain. Seizures seen in epilepsy are caused by disturbances in the electrical activity of the brain.

Epilepsy is usually diagnosed after a person has had at least two seizures that were not caused by some known medical condition like alcohol withdrawal, extremely low blood sugar, heart problems or some other medical conditions.

A seizure typically goes on for a few seconds to a few minutes. The end of the seizure is a transition back to the individual’s normal state. The Post-Ictal period or the brain recovery period can last from few seconds to hours, and the awareness gradually improves.

There is difference between seizure and epilepsy. Epilepsy means having spontaneously recurrent seizure. That means two or more seizures can be epilepsy.

Types and Symptoms of Seizures

Seizures are generally categorised into in two major groups of seizures, primary generalised seizures and partial seizures. The difference between these types is in how and where they begin. A new way of naming seizures has been developed by epilepsy specialists, but most often, these common names are still used.

Seizures that appear to both sides of the brain at once are called primary generalised seizures. Hereditary factors are significant in many of these seizures. Different types of seizures are identified by their nature and the character:

• Absence Seizures, also known as petit mal seizures, are characterised by subtle body movement. These seizures can cause a brief loss of awareness and going blank for a while.
• Myoclonic Seizures, usually appear as sudden brief jerks or twitches of arms and legs. “Myo” means muscle and “clonus” means rapidly alternating contraction and relaxation – jerking or twitching – of a muscle.
• Atonic Seizures, also known as drop seizures, cause a loss of muscle control, which may cause a sudden collapse or fall down. Muscle “tone” is the muscle’s normal tension. “Atonic” means “without tone”. So in an atonic seizure, muscles suddenly lose strength or control.
• Tonic Seizures cause stiffening of muscles. These seizures usually affect muscles in back, arms and legs and may cause a fall to the ground.
• Clonic Seizures are associated with rhythmic, jerking muscle movements. These seizures usually affect the neck, face and arms.
• Tonic-Clonic Seizures, also called grand mal seizures, are characterised by a loss of consciousness, body stiffening and shaking, and sometimes loss of bladder control or biting your tongue.

Partial or focal seizures begin with an electrical discharge or abnormal activity in one limited area of the brain. These seizures fall into two categories.
• Simple Partial Seizures do not result in loss of consciousness. They may be unusual sensations affecting the vision, hearing, smell taste, or touch, with a memory or emotional disturbances, which result in jerking, muscle rigidity, spasms, head-turning.
• Complex Partial Seizures, resulting in automatisms such as lip smacking, chewing, fidgeting, walking and other repetitive, involuntary but coordinated movements.

The most known causes of seizure involve some injury to the brain. Some of the main causes of epilepsy include:

• Head injuries that occur during birth or from accidents during youth or adulthood
• Low oxygen during birth
• Genetic conditions that result in brain injury, such as tuberous sclerosis
• Stroke or any other type of damage to the brain
• Abnormal levels of substances such as sodium or blood sugar
• Infections such as meningitis or encephalitis
• Lack of sleep
• Use of alcohol and drugs
• Missing medication doses

Epilepsy is caused out of unexpected storm or hyperactivity of the brain cells.

The purpose of practice of asana and pranayama is bouncy castle to develop control over the body and the mind. Asana prepares the entire physical functioning of the body, while pranayama improves the physiology of the body.

Asana stretches the nerves system and pranayama oxygenates the brain which ultimately controls and stabilise the brain cells from getting too excited.

Standing poses can easily be appreciated as all the asanas work mainly on the spinal muscles and nerves. Forward bends have a soothing effect on sympathetic nervous system. The cranial nerves are completely relaxed and there is tremendous passivity on the muscles of the face. Backbends stimulate the entire nervous system.

The most important effects on the nervous system is given by the inverted poses. Headstand relaxes and strengthens the neurons of the brain at once.

The role of pranayama on the nervous system is very important. Fluctuations of the brain cells cause a variation in the respiratory rate. Hence, if the brain cells are kept at optimum quietness, breathing is relaxed.

When the prana is controlled, the mind and the brain are kept under control. Electrophysiological silence has occurred in the brain cells, and as a matter of fact, biochemistry is stabilised. When the respiratory rate changes, relaxation occurs.

Here are a few important asanas and pranayama.

1. Sit on the edge of the Sugatha Prop and either hold onto the side handle or the outer edge of the Prop. Lie down on the back and raise the legs stretching up straight. Another option is to sit near the slanting edge of the Prop and roll over to lift up the legs.
2. Once the legs are straightened, hold the bottom edge handles, move the back closer to the slanting side. Rest the shoulder and head on the square cushion of the Prop.
3. The shoulders and the trunk are well supported and rested on the Prop. The legs are relaxed. The pose becomes lighter.
4. Stay for about 2-5 minutes with normal breathing. Slightly bend the knees if necessary.

Benefits: This promotes circulation and secretion of hormones enabling proper functioning of body and the brain. It stretches the entire nervous system and keeps the spine supple.

This is an important pranayama as the name states its benefits. Nadi means the veins or arteries which circulate the Prana.

This form one complete cycle. Continue about 6 rounds slowly and rhythmically.

Benefits: This helps harmonise the left and right hemispheres of the brain. 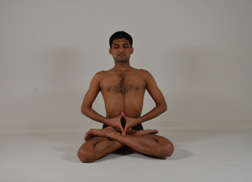 1. Sit in a comfortable posture like Padmasana or Sukhasana.
2. Observe the posture and keep the spine erect.
3. Let the body feel lighter and free from any tension.
4. Focus on either the breath or the eyebrow centre for a while.
5. Though the mind wanders here and there, just remember to come back to the attention of the mind.

Initially it may be difficult to stay focused, but it will happen by regular practice. Either try to focus or just develop the habit of staying still for about 10 minutes daily.

Benefits: The mind becomes free from agitation; it is calm and serene and at peace. The rest in meditation is deeper than the deepest sleep. 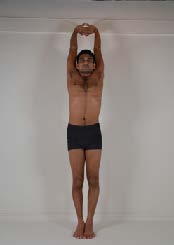 1. Stand straight, facing forward. Keep the feet together, toes and heel in line and press both leg down evenly.
2. Keep the crown of the head centered to the inner line of the inner ankle.
3. Stretch the arms forward and interlock the fingers.
4. Raise the arms, turning the palms upwards.
5. Stay in the pose for 30 to 40 seconds and breathe evenly.

Benefit: This pose elongates the spine, refreshes and aligns the body. There is a sense of calmness, peace and unity within. 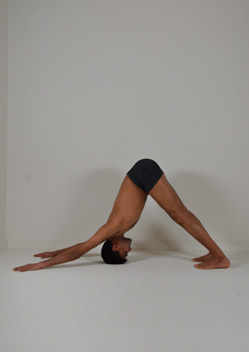 1. Start in Marjariasana (Cat Pose) by kneeling on your hands and knees.
2. Tuck the toes under, raise the head and trunk, bend the legs to raise the hips and straighten the arms.
3. Raise the hip higher and straighten the legs. Without losing the height of the hip, stretch the heels down.
4. Stay in the pose for about half to one minute or longer with even breaths.

Benefits: This removes fatigue, refreshes the brain, and soothes the nerves. It promotes healthy sleep. 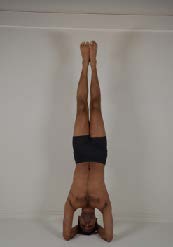 1. Place both forearms on the mat, with elbows shoulder width apart. Interlock the fingers firmly.
2. Rest the crown of the head on the mat so that the back of the head touches the palms and the palms become support around the head.
3. After keeping the head position, raise the knees from the floor by walking closer to the head.
4. Stay here with the leg straight – Ardha Sirsasana (Half Headstand), which is for beginners to practise initially.
5. Once Ardha Sirsasana is mastered, practise Sirsasana (Headstand) next to a wall with the help of a teacher.
6. Inhale, raise both legs up with the inner legs pressed together, toes pointing upwards.
7. Keep the body in a straight line and with knees locked, elbows and shoulders in line.
8. Stay for 2 to 5 minutes and relax.

Benefits: It improves circulations and vitality; and keeps the mind calm and the brain passive.

Yoga is increasingly becoming a focal point of therapy and research in treating epileptic seizure disorders. It offers an ancient, yet amazingly modern approach to treating seizures.

As therapy, the physical discipline of yoga seeks to re-establish a balance (union) between those aspects of a person’s health that cause seizures.

Research found that meditation improved the brain wave activity of people with seizure disorders leading to a reduction in seizures. It is found that patients who learned to control their breathing had an improvement in their seizure frequency.

The art and science of yoga is being discovered anew as a valuable approach to exercise self-control of seizures.