Sciatica refers to the nerve that runs along the sacral part of the vertebrae. It is the single largest nerve in the human body. It runs from each side of the lower spine through the buttock into the back of the thigh and all the way down to the foot.

It serves a vital role in connecting the spinal cord with the leg and foot muscles. Any type of pain and/or neurological symptoms that are felt along the sciatic nerve is referred to as sciatica. Sciatica is commonly caused by some type of compression of a spinal nerve in the lower back. The medical term for sciatica is lumbar radiculopathy or radicular pain.

The specific symptoms will be different depending on which spinal nerve is affected and how much it is compressed.

A variety of lower back problems can lead to pain that radiates along the sciatic nerve. Most often, sciatica pain is caused when the L5 or S1 nerve root in the lower spine is irritated by a herniated disc. The nerve roots that exit the spine to form the sciatic nerve are extremely sensitive, and the inner portion of the disc that may herniate or extrude contains proteins that are inflammatory and easily irritate the nerve. 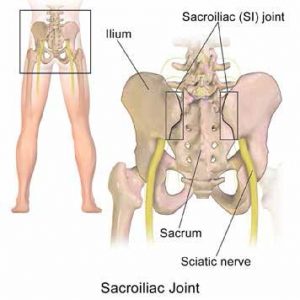 The sciatic nerve supplies sensation to the skin of the foot, as well as the entire lower leg (except for its inner side). Common causes of sciatica include the following lower back and hip conditions: spinal disc herniation, degenerative disc disease, lumbar spinal stenosis, spondylolisthesis and piriformis syndrome. Other acute causes of sciatica include coughing, muscular hypertension and sneezing.

Initially Treatment is typically with pain medications. It is generally recommended that people continue with activities to the best of their abilities. Often all that is required is time: in about 90% of people the problem goes away in less than six weeks. If the pain is severe and lasts for more than six weeks then surgery may be needed. While surgery often speeds up pain improvement, the long term benefits are unclear. Surgery may be required if complications occur, such as bowel or bladder problems. Many treatments, including steroids, gabapentin, acupuncture, heat or ice, and spinal manipulation, have little evidence of effectiveness.

Depending on how it is defined, 2% to 40% of people have sciatica at some point in time. It is most common during people’s 40s and 50s, and men are more frequently affected than women. The condition has been known since ancient times. The first known use of the word sciatica dates from 1451.

Spinal disc herniation pressing on one of the lumbar or sacral nerve roots is the most frequent cause of sciatica, being present in about 90% of cases.

Piriformis syndrome: In 17% of the population, the sciatic nerve runs through the piriformis muscle rather than beneath it. When the muscle shortens or spasms due to trauma or overuse, this causes compression of the sciatic nerve. It has colloquially been referred to as “wallet sciatica” since a wallet carried in the rear hip pocket compresses the buttock muscles and sciatic nerve when the bearer sits down.

Pregnancy: Sciatica may also occur during pregnancy as a result of the weight of the fetus pressing on the sciatic nerve during sitting or during leg spasms. While most cases do not directly harm the fetus or the mother, indirect harm may come from the numbing effect on the legs, which can cause loss of balance and falls. There is no standard treatment for pregnancy-induced sciatica.

Other: Sciatica can also be caused by tumors impinging on the spinal cord or the nerve roots. Severe back pain extending to the hips and feet, loss of bladder or bowel control, or muscle weakness may result from spinal tumors or cauda equina syndrome. Trauma to the spine such as from a car accident, may also lead to sciatica.

• Usually self-diagnosable
• Pain originates in the spine and radiates down the back of the leg.
• Sciatica typically affects only one side of the body.
• Pain areas: in the back, buttocks, hip, lower extremities, muscles, spine, or thigh
• Pain types: can be chronic in the back, mild, severe, severe in the back, radiating, or sharp
• Pain circumstances: can occur at night, due to injury, or while sitting
• Sensory: leg numbness or pins and needles
• Foot: difficulty raising the foot or numbness
• Also common: a burning sensation, limping, muscle weakness.

Sciatica, at times commonly referred to as low back pain, is a disorder in the alignment of the vertebrae that can be well-handled by yogic poses and therapy taught by yoga professionals. Articles from the Library of Florida State University, narrate several scientific evidences that explain the benefits of yoga for sciatica.

According to a study conducted by the Yoga Biomedical Trust, London, which inculded groups subjected to yoga therapy for sciatica and LBP, it was concluded that yoga therapy is really safe for those suffering from sciatica and other vertebral disorders compared to the conventional therapy.

An article published by Florida State University, College of Nursing, revealed that Complementary and Alternative Medicine (CAM) therapies like Yoga, Massage, Acupuncture, and Progressive Muscle Relaxation are all recommended for back pain combined with other therapies such as spinal manipulation, exercise therapy and cognitive-behavioral therapy. These therapies focus on understanding the body and its functions and use natural treatments to help the body cure itself.

In Williams (2005), “Evaluation of the Effectiveness and Efficacy of Iyengar Yoga Therapy on Chronic Low Back Pain,” the RCT placed 43 participants in a yoga group with 47 participants placed in a standard medical care group. The participants were followed for 6 months. The yoga group participated in 24 weeks of bi-weekly yoga classes and outcomes were assessed at 12 , 24, and 48 weeks. The results of the experiment showed significantly greater reductions in functional disability and pain intensity for the yoga group. The experiment also discovered that depression was also significantly lowered in yoga subjects. Williams and Colleagues found that while a reduction in pain medication did occur, it was comparable for the control and experimental group as found in the Chou articles. The yoga group had statistically significant reductions in functional disability, pain intensity, and depression at 6 months (48 weeks) compared to the control group with standard medical care. Williams and Colleagues concluded that yoga improves functional disability, pain intensity, and depression in adults with CLBP when done consistently. Similar to the findings in Williams (2005) is Tillbrook (2011), “Yoga for Chronic Low Back Pain: A Randomized Trial.” This RCT took 313 adults with a history of low back pain and split them between two groups: 156 into a yoga group, and 157 into a “usual care” group. This article failed to define what “usual care” means or entails, however, it is assumed that the “usual care” group was chosen to be the control group. The yoga group was offered 12 weeks of yoga sessions with groups being evaluated at weeks 3, 6, and 9. The results from the trial showed that the yoga group had better back function at every time point compared to the “usual care” group. This result concurs with the findings of the Williams (2005) article. 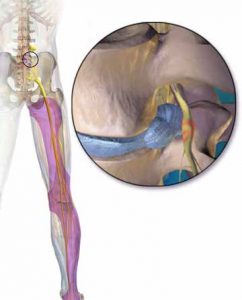 (Groessl, 2008) followed 33 VA (Veteran Affairs) patients for 10 weeks as they participated in a yoga program. The study found statistically significant improvements for pain. Using a correlation analysis, researchers found that actual attendance to the classes was associated with decreased pain. This means that the more participants attended the yoga classes, the more their pain went down. In the discussion, the study explains that their results showed that VA patients had a sizeable decrease in pain. Just as mentioned in the Williams study, this article also showed decreases in depression along with increases in energy levels and mental health. Research shows that integrating yoga therapy for the treatment of low back pain (LBP) into the NHS would result in significant cost savings as compared with usual care. The National Institute for Health and Care Excellence (NICE) Guidelines on LBP and sciatica include yoga as one of the recommended treatments for these conditions. Three groups of yoga teachers, using different yoga practices, have gained traction with the NHS for the application of yoga therapy to LBP. Many regional hospitals in England have yoga classes. The NHS Choices website, which conveys information to the public regarding treatment options, has a page dedicated to the health benefits of yoga. Several institutions offer comprehensive training programs in yoga therapy and yoga therapy is recognized as an official profession. The Yoga in Healthcare Alliance has been established to help integrate yoga therapy into the NHS. This consists of parliamentarians, leaders in the NHS, yoga researchers, health professionals and representatives from leading yoga organizations.

Yogananth Andiappan is known as a pillar of yogic wisdom and techniques from well worth a lifetime of learning. The son of well-renowned Yoga Guru Dr. Asana Andiappan, a figurehead in yoga from India, Yogananth began his yogic journey at the age of 2. He is currently completing a Ph.D at the Sport University of India, studying the effects of yoga therapy and natural yogic diet on cancer patients, and is Founder and Director of Anahata Yoga in Hong Kong.