Hindu statesman Rajan Zed, in a statement in Nevada today, termed it as a step in the positive direction to make yoga available free of cost at such an inspiring museum location and blending yoga with art.

Rajan Zed further said that yoga, although introduced and nourished by Hinduism, was a world heritage and liberation powerhouse to be utilized by all. According to Patanjali inflatable water slide who codified it in Yoga Sutra, yoga was a methodical effort to attain perfection, through the control of the different elements of human nature, physical and psychical.

According to US National Institutes of Health, yoga may help one to feel more relaxed, be more flexible, improve posture, breathe deeply, and get rid of stress. According to a recently released “2016 Yoga in America Study”, about 37 million Americans (which included many celebrities) now practice yoga; and yoga is strongly correlated with having a positive self image.  Yoga was the repository of something basic in the human soul and psyche, Zed added.

Next “Yoga in the Galleries” free-to-the- 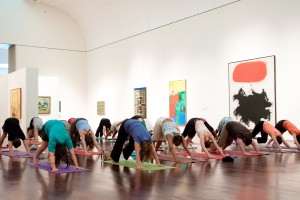 public class for all levels lead by Adriene Mishler will be held at BMA on August 18.

BMA is also showcasing Hindu gods and legends in an upcoming exhibition “Epic Tales from India” from July nine, 2017 to October 15, 2017.

BMA, founded in 1963, claims to be “one of the foremost university art museums” and offering “thought-provoking, visually arresting, and personally moving encounters with art”. Simone J. Wicha is the Director while Michael Klein is the Chair of National Leadership Board of BMA, which boasts of a permanent collection of almost 18,000 works. Gregory L. Fenves is UTA President.